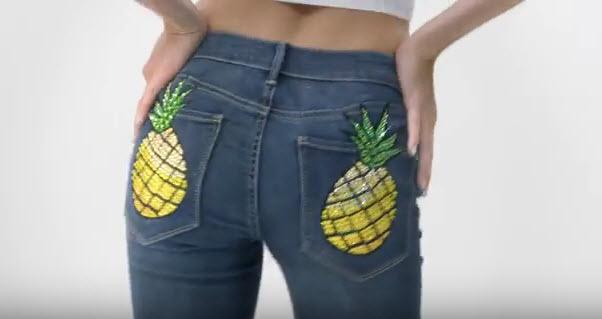 Friendship Dairies and agency Partners + Napier are parodying the literally in-your-face sexy jeans ads of the 1980s for the launch of Friendship Fruit on the Bottom Cottage Cheese.

The content of a 35-second video (below) is certainly over-the-top. The first several seconds feature female models in tight jeans decorated with bedazzled fruit patches bumping their bums together in the viewer’s face, to a disco instrumental.

A similarly clad male model soon appears (making any viewer presumption of exploitation gender-bipartisan), and makes the joke premise clear by trying to bite into a whole pineapple (following a clip of juice running down the arm of a female model as she bites into a peach).

The final, slapstick reveal has one of the models speaking into the camera -- “You didn’t think this was real, did you?” -- and a shot of the single-serve products with the voiceover message: “Now this is real… Real delicious. New Fruit on the Bottom Cottage Cheese from Friendship Dairies. A more sensible fruit on the bottom.”

The creative aims to use humor to grab attention and build brand awareness within what Friendship itself acknowledges is a “low-interest” (albeit $1.1-billion) category.

The campaign -- timed to launch during Fashion Week -- “pokes fun at the outdated and ridiculous messages women often get from the fashion industry” and “confidently puts focus on what’s real and what’s good,” says Ray Langton, senior product manager of Friendship Dairies.

The agency’s 2017 “Power of Friendship” campaign featured the wry reactions that resulted when people tricked friends who hate cottage cheese into eating it, via its secret inclusion as an ingredient in dishes like spinach artichoke dip and buffalo chicken pizza. Screen message: “Surprise! You ate what you hate (and loved it.)”