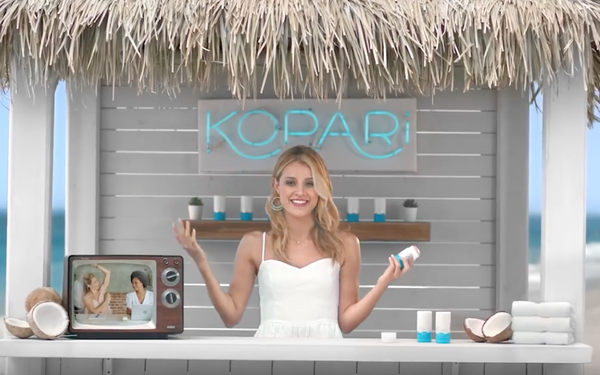 Creative agency Humanaut is launching “The Truth Stinks,” an irreverent new campaign that takes on traditional products containing aluminum. Kopari is derived from the Indian word kopparai and goes back to the first original extraction of coconut oil.

The effort includes two 30-second cuts of the ad along with a minute-long version that will is airing on Bravo, E!, Heartland, IFC, Ion Life, OWN, Oxygen and We TV.

The 60-second hero ad opens on a vintage TV set showing a deodorant ad in which an attractive woman appears to be pitching a prestige product. “Nothing says confidence like an armpit packed full of chemicals and aluminum,” she says.

The camera backs up to reveal a tropical beach setting, where another woman—Kopari’s narrator—ponders how great it would be if deodorant ads actually told the truth. She shows a few more spots that parody classic commercials with lines like “Try this, it’s what I use to stay dry and have aluminum slowly injected into my body, all day long!”—delivering sarcasm with a smile.

“Try new pit clogger today!” she notes, before sharing the merits of Kopari’s plant-based product. The videos end with the tagline, “Wake up and smell the coconuts.”

This is Kopari and Humanist’s first campaign together, says Lindsey Vanderbilt, Kopari director of marketing.

“They are a fantastic, hyper-creative agency that was able to create a campaign that married a straightforward message with lighthearted feel and humor,” Vanderbilt tells Marketing Daily.

“This was our biggest campaign to date, including new media outlets for us. The Coconut Deodorant is our fastest growing product.”

Humor is effective in delivering what in essence is a serious message, Vanderbilt says.

“When you're talking about toxic and sketchy ingredients found in products, it can be a bit of a downer,” she says. "When you let people laugh, they're able to connect to your message on an emotional level, which is the kind of relationship we want to have with our customers.”

Other elements of the campaign include paid social, podcasts, influencer postings and product sampling.

“We all love to imagine what commercials would be like if they told the truth,” says David Littlejohn, Humanaut chief creative director in a release. “When you inject some honesty into those classic deodorant ads, the aluminum-based products really unsell themselves.”

The campaign runs through November.