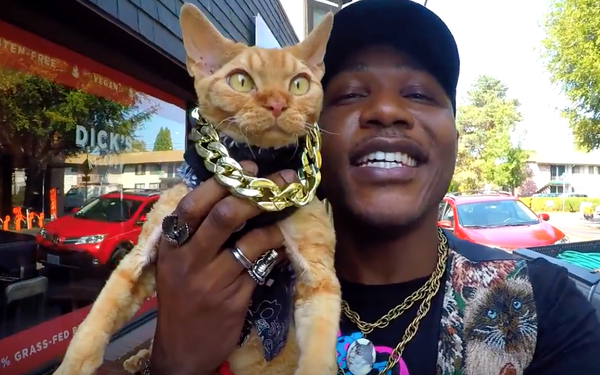 Arm & Hammer is partnering with cat rapper iAmMoshow for a National Cat Day (Oct. 29) promotion that will benefit a cat welfare organization.

The musician is releasing a YouTube video today that features his five cats and promotes Arm & Hammer Clump and Seal Slide cat litter. To help raise awareness for trap-neuter-return programs, Arm & Hammer has pledged to donate $10,000 to Mac’s Fund if the “Slide” video hits one million views by Jan. 31.

As in all of his videos, the rapper uses catchy lyrics to spread his positivity and love for cats. In “Slide,” he tackles one topic of cat ownership that is often dreaded, cleaning the litter box.

With more than 420,000 Facebook followers and most recognized for his "Cat Bath Rap," "Cat Emotions" and "Cat World" videos, iAmMoshow has built a strong online community to support love for cats.

He's just released his third album, with songs on topics include supporting animal shelters, trap-neuter-return programs, the benefits of not declawing cats, adopting versus shopping for a cat and a reminder to consider adopting black cats, which are often overlooked or unwanted.

“We plan to communicate the launch of the video through multiple channels,” Joe tells Marketing Daily. “It will be featured on our Facebook, Instagram, YouTube page, website and also through iAmMoshow’s social media. In addition, we’ll reach out to those who signed up for our newsletters and online community AHKittyKrew.com.”

Arm & Hammer’s ad agency, The VIA Agency, helped create the social posts after the video was produced.

“It was important to us that iAmMoshow remained his authentic self, so we limited our creative input and let his talent speak for itself,” she says. “We worked with a great video production company, Bluewire Media, to shoot the video in Portland, Oregon.”

The brand’s relationship with the musician came about after Joe saw his “Cat Bath” rap on Facebook and became a fan, she says.

“I liked his mission about spreading positivity, peace and love to the cat community, so collaborating with iAmMoshow was a natural fit with Arm & Hammer, especially since he was already using our cat litter,” Joe says. “The song is about wanting to share that positive spirit with our consumers and make them feel good about having a cat in a fun and engaging way.

"Partnering with iAmMoshow has been a great experience, so I can see us working together again."