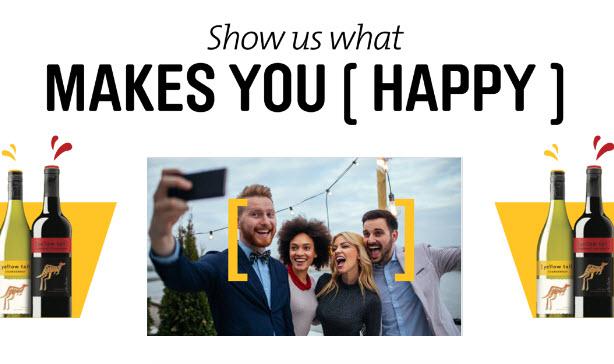 Having successfully used a local market saturation strategy to achieve mass viewership and increase U.S. sales during the past two Super Bowls, Yellow Tail wine will be playing that game again in 2019 — this time, with an ad that features user-generated content.

Those markets cover 76% of the U.S. population, and the ad will reach more than 100 million viewers, he tells Marketing Daily.

The local ad-buy strategy was devised originally for 2017’s Super Bowl, to work around Anheuser-Busch’s exclusive rights to air ads for alcoholic beverages during the game. The move enabled Yellow Tail to become the first wine brand in nearly 30 years to advertise during the game.

In addition to investing more than $6 million in the game TV buys and buys for ads to run during January and February in outlets including iHeart Radio, YouTube and Buzzfeed, Yellow Tail will invest $1.5 million to support the Super Bowl campaign with in-store promotions and local activations, reports Douglas.

The campaign also includes “a heavy emphasis on public relations and social sharing, starting with harnessing influencers to spread the word and encourage participation,” he says.

This year, the 30-second ad to air in local markets during the Big Game on Feb. 3 will incorporate up to four seconds of footage each from two, six-second videos submitted in a consumer contest that’s already underway.

To enter, fans need to shoot and share a six-second video of what makes them happy, and share it on Instagram or Twitter, tagging it with #tasteslikehappy and #yellowtailwineus, or upload it via the contest site, by Nov. 28. (Entrants must also follow Yellow Tail on the social media platform they used to enter the contest.)

One of the two entrants whose videos are chosen for the ad (the grand-prize winner) will also win a travel voucher worth $15,000 for a trip for two to a “happy place” anywhere in the world.

The winner agrees to share moments from this “ultimate happy experience” with the brand’s 1.3 million social media fans. Yellow Tail claims to have the largest social media following of any wine brand.

Yellow Tail is also showcasing the video entries on the contest site.

The campaign’s theme “is about doing something positive in sharing happiness with others,” which is a “core value” or the Australian wine brand, says Douglas.

Douglas confirms the brand saw growth in each of the first two game campaigns, but stresses the importance of sticking with a strategy.

“The first year we did the Super Bowl, we saw positive indicators and knew we were onto something,” he says. “But it wasn’t until the second year that we were able to transition this into sustained growth. We have even higher expectations this year.”