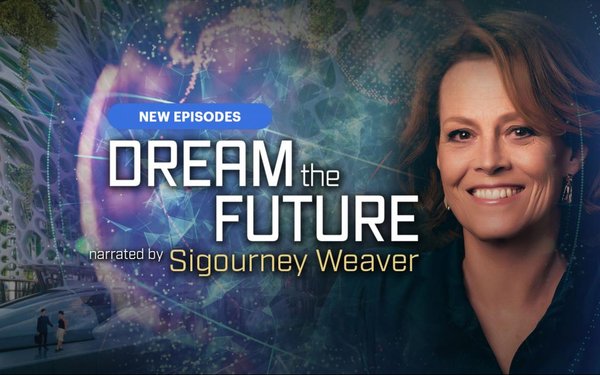 In August, CuriosityStream said Showcase would have six category-exclusive sponsors before year’s end. So far, two are on board: Toyota (automotive) and Sprint (telecommunications).

Toyota Theater has seven videos. Four are Toyota commercials, while three are episodes of a series, “Dream the Future,” in which narrator Sigourney Weaver promises to take us on “an amazing journey to 2050.”

It sounded like fun. I started with the series’ first episode, “Cities of the Future.”  A five-second bumper (“the following program is presented without commercial interruption thanks to Toyota”) was followed by a 15-second pre-roll (including the “You are so beautiful” ode to Toyotas, and the slogan, “Let’s Go Places”).

Then, less than three minutes into the uninterrupted, 52-minute episode, a talking head asked if, in 2050, “When I can go to my destination in a guaranteed arrival time, will I still want to own a car?”

Definitely not what I expected from Toyota Theater, so I kept watching. There was much more talk about how, by 2050, cities will have shifted their focus “from cars to humans, especially to cyclists and pedestrians.” Then, Weaver declared: “Private vehicles, yesterday’s technological marvels, have become one of our most pressing problems…It’s time to say goodbye.”

I was shocked. Of course, the episode also included a look into autonomous, self-driving cars, which I knew are on Toyota’s agenda, but how was Toyota Theater supposed to help sell more Camrys and Priuses right now?

Perhaps the next episode, “Transportation of the Future,” could clear up my confusion.

This time, less than two minutes into the show, a talking head declared how great it would be “if we were to remove eight cars out of 10, and still take everybody to their destination exactly when they need to be there.”

A few minutes later, someone said, “Travel by car is still, by and large, a waste of time” and Weaver declared: “Yesterday’s symbol of success, the car…is no longer the stuff of dreams.”

“To stay relevant,” she continued, “manufacturers have promised a revolution with ultra-smart cars.” This, I thought again, must be the part Toyota likes. At that moment, the documentary cut to a prototype of a self-driving, autonomous vehicle – from Mercedes.

Yet at the end, after Weaver had again cited futurists’ goal of “creating a car-free city,” the credits thanked Toyota, alongside Chevrolet, GM, Daimler and Rolls- Royce.

Curious about this CuriosityStream curiosity, I located the August press release announcing the launch of ‘Toyota Theater,’ and found that there is indeed method to the madness.

"As Toyota shifts from a traditional automotive manufacturer to a mobility company, our culture of innovation has never been more critical,” said Vinay Shahani, vice president, integrated marketing, Toyota Motor North America, “particularly in areas such as artificial intelligence, robotics, sustainability, and safety.”

Joe Abruzzese, former head of ad sales at Discovery and CBS who recently joined CuriosityStream as chief advisor for sponsor partnerships, added that Toyota will be able “to effectively communicate with today's most sought-after viewers who are eager to learn more about breakthrough advancements in science and technology that will positively impact our future.”

In other words, Toyota is all on board with whatever type of vehicle will get us to our destinations three decades from now.

So kudos to Toyota and its agencies, Saatchi & Saatchi and Zenith Media, for a brave bit of forward-thinking marketing.

I did also take a cursory look at the three shows in Sprint Theater: “Digits,” about the insides of the Internet; “Illusions,” presenting cool visual mind-benders; and “Exploring Quantum History with Brian Greene,” which sounds like, and sometimes seems to actually be, a college lecture. None of the Sprint shows had pre-rolls or bumpers.

Speaking of bumpers, though, next time I need to go places, I think I’ll rent a Toyota.