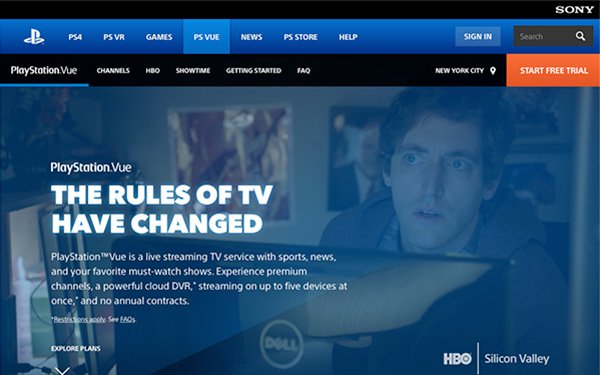 The streaming multichannel video market is a crowded one, with companies like Dish’s Sling TV and DirecTV Now competing against tech-driven companies, such as YouTube TV, Hulu with Live TV and Philo.

The content these services have is often similar, with the same suites of channels from the major content providers available across many of the offerings. Where they differ, however, is in their product.

The user interface, recommendation engines and video delivery systems of each are unique. In some cases, they  can be as synonymous with the provider as the content. (Just look at YouTube and Netflix, which have become so proficient at delivering video that when one has a problem, it tends to become national news.)

The product is where another competitor in the space has quietly been able to shine, according to new data from streaming TV intelligence platform Conviva.

Sony, through its Playstation Vue streaming service, offers a suite of streaming channels similar to those offered by the vMVPD competition.

Conviva conducted a study of Playstation Vue’s streaming product and benchmarked it against the competitors. Playstation Vue had a rebuffering ratio of 0.36%, compared to the industry benchmark of 0.4%, and the median of 1.12%. It hit that ratio while delivering streaming video at a bit rate of 4.59 Mbps, compared to the industry median of 3.07 Mbps.

Playstation Vue had less buffering than its competitors in the space, even as it delivered video that had a higher picture quality.

Just as the market is seeing a mad rush for content, with giants like Netflix, Amazon, and Disney securing exclusive deals with top writers and producers, there is also a rush for product.

Conviva’s data suggests Sony has performed well, but with competitors like Google’s YouTube and Hulu also playing in the vMVPD space, any lead in product quality is tenuous.