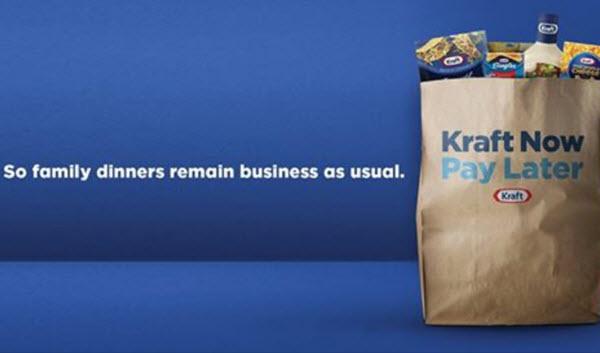 Kraft and Nestlé Waters North America are among the many companies performing real services, and winning consumer goodwill, by pitching in during the now longest-ever federal government shutdown.

Kraft today announced that it’s opening a grocery pop-up store where workers affected by the federal government shutdown can pick up free Kraft staples to help tide their families over.

Kraft has dubbed the initiative “Kraft Now. Pay Later,” in reference to its request that, where possible, those who benefit from the store make a donation to a favorite charity once the shutdown is over.

Parents “shouldn’t have to worry about putting dinner on the table because they aren’t receiving a paycheck,” said Sergio Eleuterio, Kraft’s head of marketing. “Kraft stands for families and we want to support the families who have built our brands.”

Some 800,000 government employees across the country are estimated to be affected by the shutdown, and many are obviously based in the D.C. area, where the government is the largest employer.

Nestlé Waters N.A., meanwhile, has partnered with Keep America Beautiful to help mobilize affiliate organizations and volunteers across the country to clean up trash in national parks.

The beverages company has offered financial donations and employee volunteers to assist in the efforts.

The national initiative will kick off on St. Simons Island in Georgia, where an affiliate of Keep America Beautiful has committed to cleaning up and maintaining trash and recycling container service at Fort Frederica National Monument and the Bloody Marsh National Monument during the shutdown.

Other affiliates are engaging national parks staff in their areas to provide support for clean-ups as needs arise.

“We believe that even one bottle or can that is not recycled properly is one too many. When we heard about the need in our national parks, we wanted to help," said John Caturano, senior manager of packaging and recycling programs at Nestlé Waters N.A.

Nestlé Waters’ efforts will no doubt generate much-needed positive attention for one of the largest bottled water marketers at a time when addressing the plastic bottle pollution crisis is the focus of increasing intervention initiatives by local and national governments.