Tostitos To Livestream Tortilla Chip Bowl From SBLIII For 53 Hours 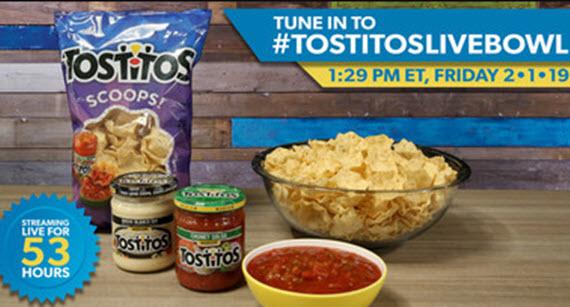 They may not be getting a Super Bowl ad this year, but Tostitos will be getting plenty of camera time.

The PepsiCo brand will go for the unofficial record for a live stream of a tortilla chip bowl, set out in the brand’s cantina at the game in Atlanta.

"This might be the most exciting thing to hit the Super Bowl marketing scene in a decade, maybe ever…or maybe not at all," said Sheldon Boyea, senior director of marketing, Tostitos, the Super Bowl’s official chip and dip sponsor.

Droll commentary aside, the brand offers hope of at least a few moments of interest, courtesy of appearances by current and former NFL stars, including Barry Sanders, Dak Prescott, Matt Ryan, Baker Mayfield and Tony Gonzalez.

Also, fans watching the action will be able to request the chip flavors used to refill the bowl.

The brand will also toss out various social media engagement incentives during the live-stream marathon. For instance, the 53rd person to comment using #TostitosLiveBowl will win a jar of Tostitos Queso Blanco. And if the brand reaches 53 million comments using the hashtag, the 53-millionth commenter will win 53 bags of Tostitos.

As part of its game plan, Tostitos also released a series of 15-second videos: “public address announcements” touting the importance of having the brand’s chips and dips on hand for game-viewing parties. One of these (below) has logged an impressive 2.1 million views on YouTube since its posting on Jan. 15.