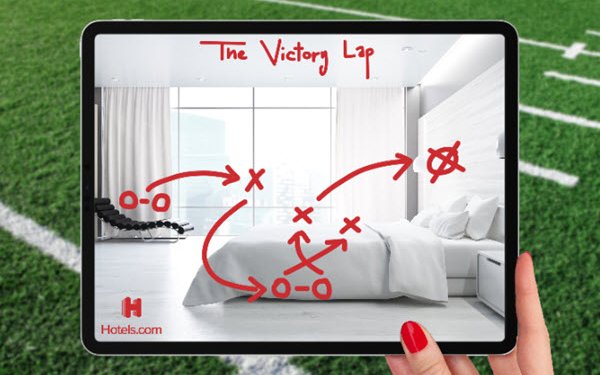 In 2016, the NFL made a splash with a video featuring choirs made up of people of various ages said to be Super Bowl babies.

(To risk party-pooper accusations, while sports victories have been linked to mini baby booms, it appears that the phenomenon as linked specifically to the Super Bowl hasn’t been documented.)

But such details don’t get in the way of inspired promotions.

For this year’s Super Bowl, both Pizza Hut and Hotels.com have decided to play on the supposed phenomenon to get some buzz.

As part of its “Overdeliver” campaign supporting its first year as an official NFL sponsor, Pizza Hut is running a contest in which the parents of the first baby born during this year’s game will win a year’s worth of pizza (a $520 Pizza Hut gift card) and two tickets to 2020’s Super Bowl.

To enter (rules here), parents with a baby born during the game need to post a photo of their baby, and exact time of birth, on Twitter, tagging @PizzaHut and using #PizzaHutSpecialDelivery and #promotion in the post.

Hotels.com, meanwhile, is encouraging fans of the winning team to visit www.BigGameBabies.com within 24 hours after the end of this year’s 53rd Super Bowl game to enter for a chance to win one of 53 one-night hotel stays being given away.
fast food, hotels, qsr, super bowl, travel
Next story loading