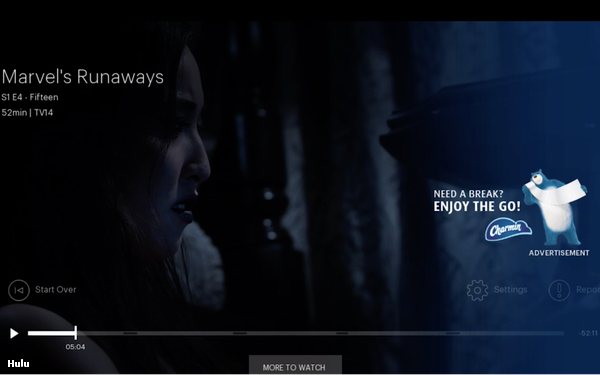 Hulu is rolling out a new advertising format, in an unusual place: the pause screen.

The streaming service is partnering with Coca-Cola and Charmin as beta advertisers for the ad format, which it says will roll out on select programming in the second quarter.

Hulu’s ad-supported tier has long had pre-roll ads, as well as more traditional commercial pods. The company has since expanded those offerings to include sponsorships and takeovers, placement on search and show pages.

Other formats range from T-commerce to interactive overlays.

The company has been aggressive in experimenting with new formats and the “pause ad experience,” as the company is calling the new format, is another example.

It works like this: a viewer is watching a show, and they hit pause. When they pause the show, a silent, static ad appears on the screen, with relevant messaging.

Charmin, for example, would present an image of their bear mascot and logo, with the message “Need a break? Enjoy the go!”

Hulu says it settled on the format after “extensive user testing.”

“Our pause ad research found that consumers generally preferred ads that were subtle and nonintrusive, and that extensive audio and video when pausing was considered disruptive,” Hulu head of ad platforms Jeremy Helfand wrote in a blog post. “These insights led us to take our current approach to pause ads, and the research so far has shown a positive response from viewers.”

Hulu is betting big on its new ad experiences.

Earlier this month, the company lowered the base price for its ad-supported tier to $5.99 per month, betting it could make up the difference in its advertising products.