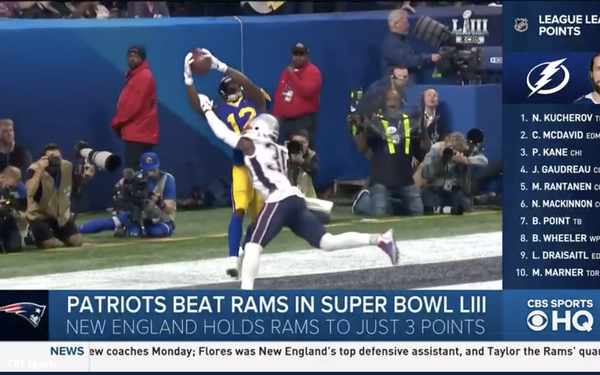 Sunday night’s Super Bowl may not have broken any TV ratings records, but it broke new ground for consumers who preferred to stream the game online.

CBS says the game drew an average minute audience (one of the closest digital metrics to the Nielsen average viewership standard) of 2.6 million viewers, up 31% from last year’s Super Bowl, and a new streaming record.

That means that at any given minute, some 2.6 million people were streaming the game online. CBS says 7.5 million unique devices streamed the game, up 20% from last year’s game, consuming a total of 560 million minutes of coverage.

CBS also says the Super Bowl shattered a number of records for its CBS All Access subscription streaming service.

The company says it set a new record for subscriber sign-ups, unique viewers and time spent, though it declined to offer specific figures. The previous single-day sign-up record was spurred on by the launch of the new “Star Trek” series for the streaming service.

CBS used the Super Bowl as a platform to promote All Access and its upcoming reboot of "The Twilight Zone."

While the streaming numbers are good, they paled in comparison to the linear TV viewership, which averaged around 100 million viewers. As more consumers connect streaming devices to their TV sets, and as mobile viewing options become more plentiful, those streaming figures are expected to rise.