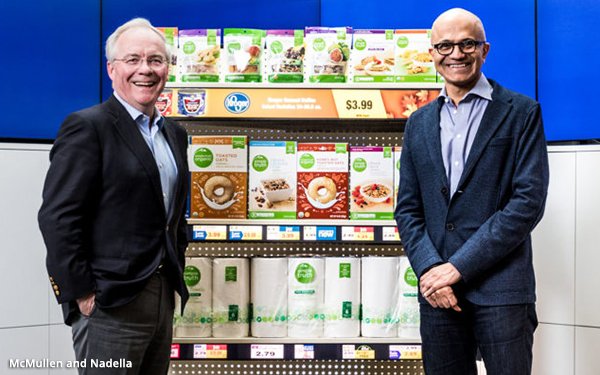 Advertising via digital shelves in supermarkets is on the way.

The Kroger Company and Microsoft introduced a collaboration at the recent NRF Big Show to create a connected store experience involving smart shelves.

The system uses Microsoft Azure to store and process data generated near the smart shelves and on the Kroger app.

The system uses what the companies call EDGE (Enhanced Display for Grocery Environment), a shelving system using digital displays rather than traditional paper tags, to indicate prices and promotions along with nutritional and dietary information, according to the Microsoft announcement of the system.

The Edge shelf will allow Kroger to generate new revenue by selling digital advertising space on the shelves to CPG brands, according to Microsoft.

A small test by “Field Agent” using several shoppers found that most purchase decisions could be influenced by brand messaging on the digital shelves. Almost all the shoppers said they would prefer the digital shelves in the store where they currently shop for groceries.

The real power in connected shelves in grocery stores is down the road, as prices can be changed dynamically based on product supply and demand. For example, shoppers could see a certain price on a product as they move through the aisle, and then product pricing could be changed based on inventory.

Connected shelving is not new, but it’s finally getting practical from a pricing standpoint.

The Kroger Microsoft deal is intended to create a commercial product of digital shelves to be sold to the retail industry. To emphasize the significance of the deal, both Kroger CEO Rodney McMullen and Microsoft CEO Satya Nadella participated in the announcement.

Shoppers can expect that connected shelves ultimately will be coming to a store near them.

And those shelves will contain dynamic advertising messaging.