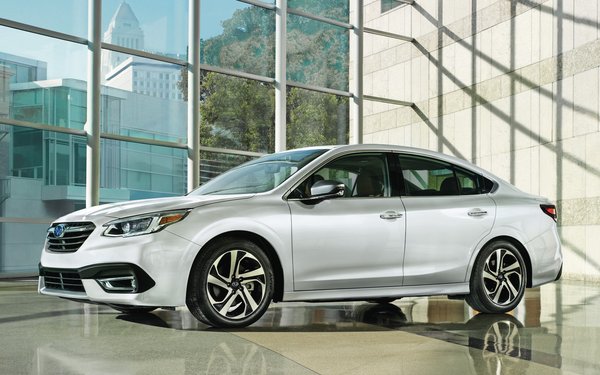 CHICAGO — Subaru of America unveiled its seventh-generation Legacy sedan during the auto show’s press preview days, including a new tagline that plays off the automaker’s overarching “Love” theme.

Subaru has used “Love. It’s What Makes A Subaru A Subaru.” for just over a decade.  When the Legacy marketing breaks in the fall, it will include the tagline: “Love. For All The Right Reasons.”

“Obviously there’s a tie-in with the brand, the love campaign,” says David Sullivan, Subaru manager, marketing launch and strategy. “We always like to sort of bring things back to the brand and make sure we are talking about both at the same time. We want the attributes of the brand: safety, longevity, versatility, we always want that to wash over the products that we are talking about at any given time.”

Social and digital will be a focus with the campaign, he says. The marketing will emphasize that the 2020 model-year version of the Legacy (a nameplate which has been around for 30 years) is the safest and quietest, with the largest interior.

“A lot of those themes, we tie back to the brand, but also we’ve heard from customers those are very important shopping consideration aspects in the segment,” Sullivan tells Marketing Daily. “So we are always trying to take things we can say about both and weave them all together. And that’s why ‘Love: For All The Right Reasons” alludes to that this is a family car, it’s got to be capable to do a lot of things very well for a family.”

When the car was tested with consumers, they really loved the interior, he says.

“When you are carting the kids around and trying to get to work or the store or road trips on the weekend, you spend a lot of time inside the car,” Sullivan says. “We took that insight and tried to weave that through a lot of the language. When you have family members inside the car, you want them to be safe. Safety is a really big consideration. And the good thing is it speaks to both the brand image and what we’re trying to talk about with the car.”

Subaru uses psychographic rather than demographics, and the target for the Legacy is someone who already likes sedans.

“We’re not trying to say this is an SUV substitute even thought it can do lots of the things that a crossover or SUV-type vehicle can do,” he says. “At the same time, it’s going to drive more nimbly, it’s going to be comfortable -- and some people just like that sedan body style.”

Despite other automakers pulling away from sedans, it’s still a 1.5 million unit per year segment in the United States -- "a very significant segment in the market,” Sullivan says. “Running away from sedans the way some of our competitors are doing is not a great idea. When we researched this with customers, we had a group of customers that psychographically were just predisposed to like the styling. It’s sleeker, it’s not as bulky, they like the way a sedan drives, and they really didn’t want to replace that with a crossover or SUV.”

Subaru hopes to pick up some of the customers who might have bought one of the sedans that are being eliminated.

“Now we have a turbo model and a more upscale interior,” he says. “We can draft a little bit from our mainstream competitors like Honda or Toyota or VW, and we can also draw from the luxury automakers as well. I was watching the livestream [of the vehicle unveiling] and someone said ‘wow, that looks like a Volvo interior.’”

One focus for the marketing: “We want to get you into the car, we want you to drive it, because when you drive this, you’ll buy it,” Sullivan says. “So a lot of our work will be oriented toward getting people to take a test drive. Compare us, that’s fine. We’ve got more rear seat legroom than anyone else in the class.”