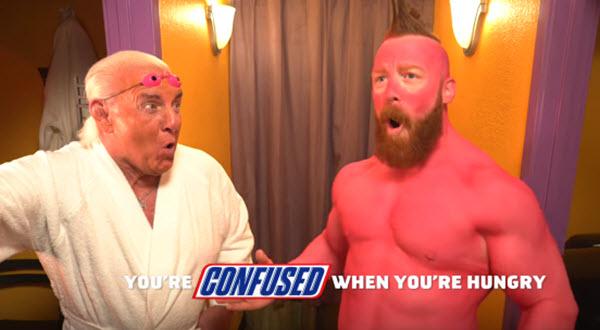 Mars, Inc. has expanded its Snickers partnership with WWE —including co-branded bars — and added a Skittles component.

Snickers will be the exclusive presenting partner for “WrestleMania” for the fourth consecutive year.

The event, on April 7, will be livestreamed on the WWE Network, and again feature WWE-produced content in which WWE Superstars promote Snickers’ “You’re Not You When You’re Hungry” campaign.

The sponsored content will also air during WWE’s “Monday Night Raw” and “SmackDown Live” TV shows on USA Network, and on WWE’s global digital and social platforms, including its YouTube channel, which is billed as the world’s most-viewed “sports” channel and second most-viewed channel overall. (One of last year’s videos is below; a screen grab from 2017 is above.)

This year, Snickers is also releasing five limited-edition Hunger Bars that feature the catchphrases of five of WWE Superstars on the packaging. The co-branded bars will be available March 18 through mid-April exclusively at Dollar Generalstores.

In addition, single Snickers items will carry digital coupons, and DollarGeneral.com will offer a digital “Superstar Yourself” experience.

The partnership will also include a Snickers presence at WrestleMania Axxess, WWE’s five-day, interactive fan festival in Brooklyn, N.Y., and custom digital and social content sponsorships on WWE.com and YouTube.

This year, the Skittles brand will be presenting partner for WWE’s “Hell in a Cell” event in September, which includes a cross-platform promotion via WWE’s global media channels, a co-branded custom integration in the telecast, among other elements.