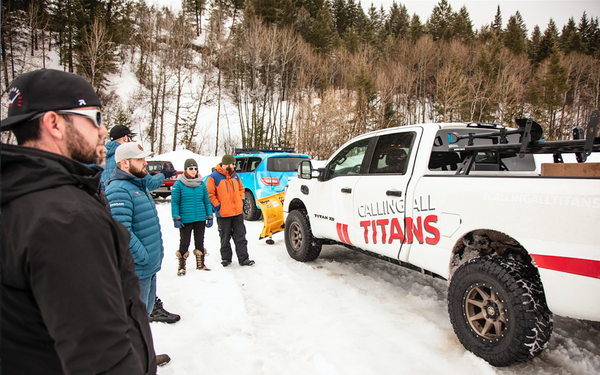 Nissan North America’s first Titan Adventure program was as much a four-day owner’s clinic as it was a way to engage the pickup truck’s hardcore enthusiasts.

The automaker recently invited pickup truck owners, influencers and ambassadors to a #Titanadventure in Wyoming and Idaho. About 20 attendees gathered for four days of outdoor activities featuring the Titan, including an off-road “snow school” where they learned how to use the Titan to plow and excavate vehicles stuck in snow.

The program “allowed us to see our customers as more than just statistics and feedback from a survey or focus group,” says Jeremy Meadows, senior manager, marketing strategy and integration.

“Our research shows that one of the greatest drivers in changing brand opinion is consumer advocacy,” Meadows tells Marketing Daily. “Titan Adventure was designed to engage with enthusiastic owners and give them a meaningful connection with our brand in the hopes that they will go home and be advocates for the Nissan Titan. From the comments and posts we have seen from this first adventure, I believe we achieved our goal of making this group of owners into Nissan superfans.”

The program could be repeated in the future for owners and dealers, according to the automaker, whose Titan competes against the Ford F-150, Ram, Chevrolet Silverado, GMC Sierra and Toyota Tundra in the full-size pickup truck category.

“Certainly, we have found that creating a community of Titan owners is a powerful idea and one we intend to pursue,” says Meadows.

Consumers are looking for authenticity and the chance to engage with brands that align with their values, he says.

“Many of the owners who came to the Titan Adventure commented on how significant it was for Nissan to recognize them,” Meadows says. “I think it went a long way to create loyalty for those who attended and their friends, family and followers at home.”

Several Titan “Ambassadors” were on hand, including Maddie Brenneman, a fly fishing guide who has 111,000 followers on Instagram and Cory Bahr, a former Food Network star and the chef/proprietor of Parish restaurant in New Orleans.

Ambassador relationships are renewed annually and include a combination of social content and in-person experiences. Ambassadors get access to a Titan pickup to integrate into their lifestyle. Nissan currently is looking at ambassador plans for the coming year, which could include adding ambassadors for other Nissan vehicles.

“Social media is becoming a very significant tool for influencing purchasers and how they perceive the brand,” McGraw tells Marketing Daily.

There were no requirements for posting to social media from the program, but Nissan tried to create an experience both the owner enthusiasts and ambassadors would be inspired to share, she says.

“The attendees were chosen as a cross-section of people who had significant social media reach, were zealots about their trucks and those influential in the Nissan truck space,” McGraw says. “We also invited some enthusiast media like the Nissan Nation podcast and InstaCummins who have an enthusiastic following of Nissan fans.”

In researching potential invitees for the event, Nissan discovered many brand advocates.

“I was amazed by how many of our owners have dedicated social media pages, names and personalities for their trucks,” she says. “I think because Titan ownership is less common than many of the more traditional truck brands, our customers find each other on social media to find their community.”

Nissan declined to state the cost of the Titan Adventure program, but Meadows says it far exceeded expectations.

“It was a powerful opportunity for us to learn who the real consumers are driving our trucks and a chance for them to learn more about their vehicle and who we are an organization,” he says.