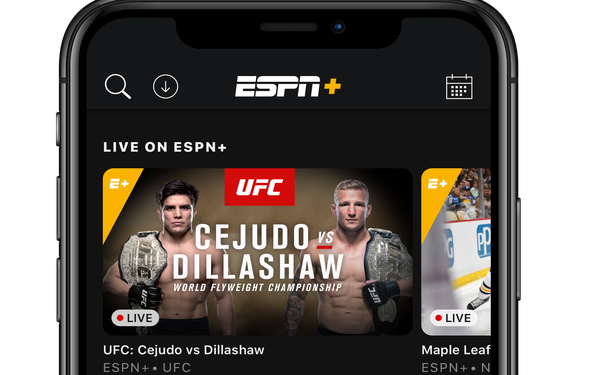 For the better part of two decades, cable TV pay-per-view was dominated by combat sports. Boxing, professional wrestling, and more recently mixed martial arts (MMA) have been the glue that has held the ultra-premium offerings together.

Now, that is all beginning to change. Just as consumers are increasingly turning to streaming platforms for their entertainment content, promoters of combat sports are adjusting their strategies accordingly.

The most stunning example of such a change was announced last week, with Ultimate Fighting Championship (UFC), the biggest name in MMA, naming ESPN and its streaming service ESPN+ the exclusive provider of UFC pay-per-view events.

Under the terms of that deal, new ESPN+ will get one free UFC event, with existing subscribers paying the standard $59.99 per-event rate. The companies say they will test out other bundled pricing formats in the coming months.

The deal sent shockwaves through the industry, with UFC turning to a content partner to sell its signature events, rather than a bevy of pay-TV providers.

Still, the UFC deal was more the culmination of a trend, rather than the beginning of one. The WWE started offering its pay-per-view events on its streaming WWE Network nearly five years ago, and has been slowly building up direct subscribers and siphoning pay-per-view buys ever since.

Meanwhile, an upstart streaming sports service called DAZN (pronounced “da-zone”) has signed the richest deal in boxing history with Golden Boy promotions and boxer Canelo Alvarez last year. That deal is worth a minimum of $365 million, a source familiar with the deal told Video Insider.

Starting this year, every single one of the WWE and UFC signature events -- events that had been a staple of pay-per-view -- will instead be offered directly to consumers over streaming devices through ESPN+ and WWE Network, while many of the very top boxing matches will only be available on DAZN.

The changes in distribution also present new opportunities for fans, who now have fresh options to watch their favorite matches. Whereas previously viewers had no choice but to pony up cash for every pay-per-view event consumed (or go to a bar and pay for the event in drinks), now many of the events will be available in a simple, easy-to-cancel subscription. Other events, such as UFC, will be available at lower price points thanks to innovative new bundling techniques.

While traditional league sports such as the NFL and NBA are keeping their signature events on traditional linear TV, the combat sports are innovating in ways that could impact how sports are watched in the future.

If the streaming platforms are able to handle the influx of viewers that a pay-per-view event brings, a major sporting event from the NBA or NFL should be possible too.