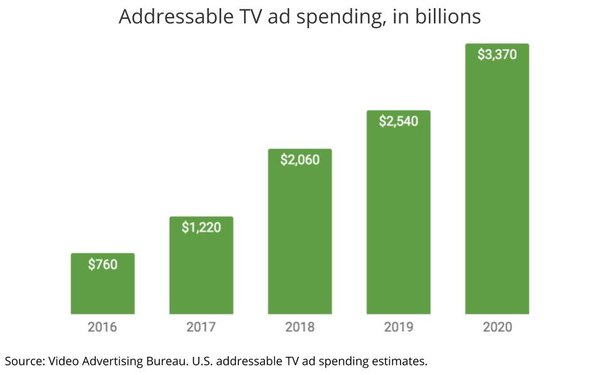 U.S. addressable TV spending is expected to rise 33% next year to $3.37 billion from $2.54 billion in 2019, according to the Video Advertising Bureau.

The report estimates 54% of all TV homes are addressable TV homes -- 64 million -- can receive targeted TV advertising. This is up from 49.8 million addressable homes in 2016. Nielsen says there are a total of 119.9 million U.S. TV homes.

The VAB says this amounts to an addressable TV audience -- those 2 and older -- of 162.2 million, which has grown 27% over the past two years.

The VAB estimates that 55% of U.S. addressable TV agency and marketing professionals are planning to increase future spending. Some 15% of advertisers are now including addressable TV in their buys on a regular basis; with 35% having “experimented” with it.