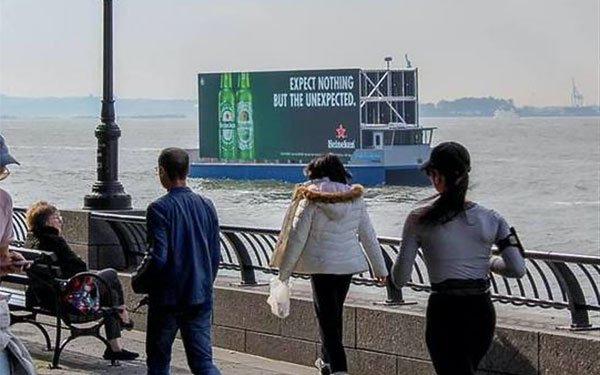 Mayor Bill de Blasio says the Ballyhoo Media’s LED billboards, which travel on a barge along the Manhattan and Brooklyn waterfronts, are breaking local laws.

The city seeks penalties of up to $25,000 per violation, per day against the invasive marketing. “Our waterways aren’t Times Square,” stated Mayor de Blasio. Officials also claims the ads pose a safety hazard on the waterfront highways.

The billboards, which have carried ads for Heineken and Universal Pictures’ film “Dr. Seuss’s The Grinch,” among others for several months, usually follow a route from the Intrepid Sea, Air & Space Museum on Manhattan’s West Side, head south around Battery Park and up the East River.

Ballyhoo Media describes itself as “the newest and most effective form of beach advertising" on its Facebook page.