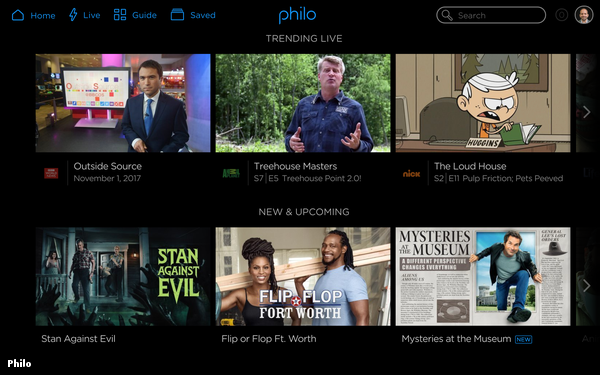 The streaming virtual multichannel video provider (vMVPD) Philo has eliminated its least expensive tier of service, which offered about 40 channels for $16 per month.

Going forward, Philo’s cheapest option will be its $20 tier, which includes 58 channels.

In an open letter posted to the company’s website, Philo CEO Andrew McCollum was surprisingly blunt about the decision.

“Since we launched 18 months ago, most of the other companies in our space have raised their prices, in some cases, multiple times. We didn’t want to do that,” McCollum wrote. “Still, when we looked at all of the costs of operating Philo — which increase over time — consolidating into a single $20 package was the best way for us to maintain the same offering we have today..."

The company faced a difficult choice. McCollum said rather than cut back in other places, or initiate a small price hike for all customers, Philo is banking on new customers to be more profitable.

Existing $16 per month subscribers will be able to continue with their service for the time being. Despite the change, Philo still has the cheapest offering among the so-called “skinny bundle” providers.

DirecTV Now, Hulu with Live TV, YouTube TV, Playstation Vue, and FuboTV all cost $45 per month or more, with Sling TV offering a relatively bare-bones base package at $25.

Many of these companies are hoping to leverage advanced advertising technology to provide revenue growth, but with expenses remaining high, and advanced ads growing at a rapid but not explosive pace, some price hikes have become necessary.

Philo, which counts companies like Viacom, AMC Networks, and Discovery Inc. as investors, has been able to keep its relatively low price by focusing on entertainment channels. It avoids sports channels and certain other high-priced channels.