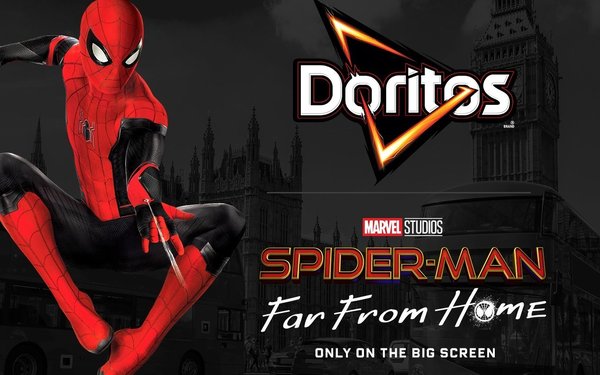 Doritos is an early, ambitious entrant in the summer-flick partnership game.

The PepsiCo Frito-Lay brand has announced a promotional deal with Columbia Pictures’ "Spider-Man: Far From Home" that will span 35 world markets and include an online game, a sweepstakes, limited-edition Doritos, TV and digital advertising/content, and movie-themed packaging and in-store displays.

Doritos packaging in North America, Latin America, Egypt and Asia will feature images from the film, which has the Marvel superhero and friends on a European vacation. The movie is set to premiere on July 5 in the United States.

In North America, the campaign will include a "Spidey-Sense Challenge" online game in which users, playing as Spider-Man, run a series of web-shooter training courses in various cities featured in the "Spider-Man: Far From Home" film.

Specially marked Doritos products in select markets will contain codes for use in entering a sweeps offering superhero-themed prizes and a grand prize of a European trip for two.

Limited-edition Doritos in Spidey’s signature color, red, will be sold in more than 20 countries, including Australia, Mexico and Colombia.