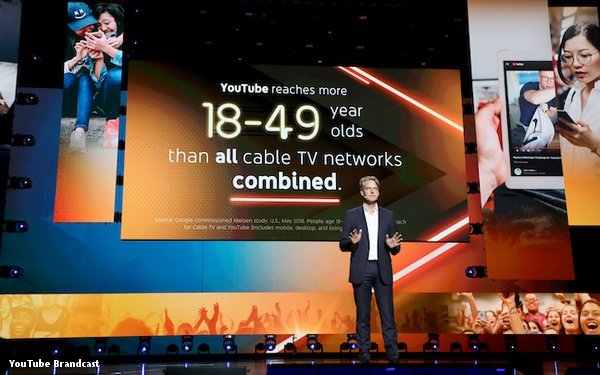 The annual newfront presentations, organized by the IAB, were once a place for upstart digital publishers to prove they could develop original content, too.

Now, they have become a place for two giants of streaming video to flex their muscles, with other presenters trying to forge their own place in the digital ecosystem.

It was hard to escape the scale of Hulu and YouTube during the newfronts. The two companies had the two largest events of the week, with Hulu taking over and completely filling up the Hulu Theater at Madison Square Garden and YouTube packing Radio City Music Hall.

YouTube had a bit less star power, with Tiffany Haddish and Alicia Keys speaking, but turned to big-name musical acts like Daddy Yankee and Dua Lipa to perform their hits (Keys performed at the after-party).

Talking to attendees at the YouTube event, it was clear that Hulu and YouTube made the biggest impact. Their professionalism, high-quality content, and pure scale was more than enough.

Other presenters massaged the data to maximize their video scale, but Hulu and YouTube outdid everyone else. YouTube says it has two billion logged-in users, and reaches more 18- to-49-year-olds than every U.S. cable TV network combined.

Hulu says that it has 58 million ad-supported viewers -- an increase of 43% year-over-year -- and is growing fast, with 80% of viewing in the living room, still the place where many marketers want to be.

Still, it was content where Hulu really shined, announcing an original slate laden with big stars and top-notch production quality.

YouTube, meanwhile, leaned into its own stars, including Keys and Justin Bieber, who will be getting original shows on the platform. The company also said that going forward all of its original shows will have an ad-supported window, giving marketers a guaranteed brand-safe environment to buy.

In all, there was a feeling that the biggest players are just getting bigger, while everyone else is trying to pick up the scraps.

Twitter, of course, made an impact with attendees of its event, with its focus on live events — a stark differentiator from Hulu and YouTube’s pitches — while Verizon used its event to evolve existing projects, like a push for 5G, and its streaming NFL rights.

Yet, the conversation in Rockefeller Center following YouTube’s event kept coming back to Hulu and YouTube, the two companies that specialize exclusively on video. That specialization appears to be paying off.