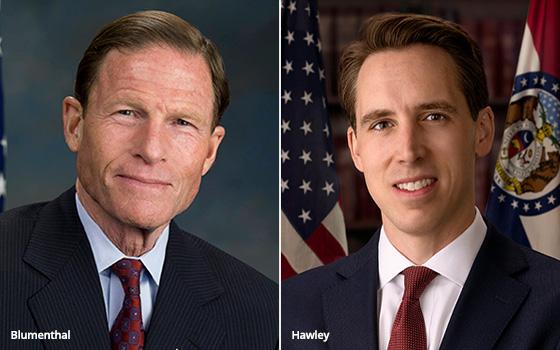 “The FTC must set a resounding precedent that is heard by Facebook and any other tech company that disregards the law in a rapacious quest for growth,” Sens. Richard Blumenthal (D-Connecticut) and Josh Hawley (R-Missouri) say in a letter to the agency. “The Commission should pursue deterrent monetary penalties and impose forceful accountability measures on Facebook, including limits on the use of consumer data, managerial responsibility for violations, and other structural remedies to stop further breaches of consumer trust.”

The letter comes amid reports that the FTC is considering fining Facebook up to $5 billion to settle an investigation into data-harvesting by political consultancy Cambridge Analytica, which obtained information for an estimated 87 million Facebook users. That potential settlement would resolve allegations that Facebook violated a 2012 consent decree by allowing Cambridge Analytica to access the data.

The FTC also reportedly is considering a requirement for Facebook to create a new privacy committee. But the agency isn't expected to mandate any new restrictions on the company's ability to collect or use data.

Blumenthal and Hawley say the potential fine is “insufficient,” arguing that the agency should also set new privacy rules for the company.

“We are deeply concerned that one-time penalties of any size every few years are woefully inadequate to effectively restrain Facebook,” the lawmakers write. “The FTC should impose long-term limits on Facebook's collection and use of personal information. It should consider setting rules of the road on what Facebook can do with consumers' private information, such as requiring the deletion of tracking data, restricting the collection of certain types of information, curbing advertising practices, and imposing a firewall on sharing private data between different products, including Facebook's ad platform.”