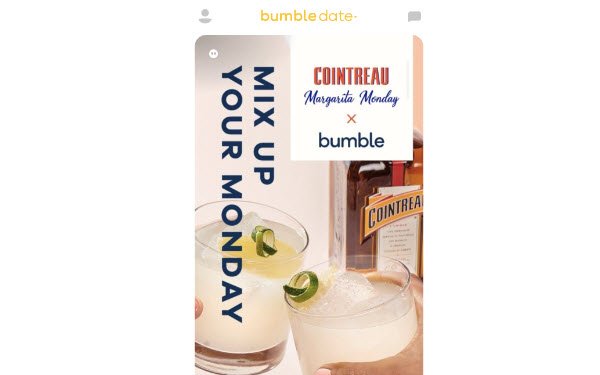 These days, liquor brands are more eager than ever to differentiate themselves by creating IRL (in-real-life) experiences designed to engage young adults.

Not surprisingly, such efforts are particularly prevalent during the summer months.

Cases in point: Cointreau’s partnership with the Bumble dating app, and Courvoisier’s with Def Jam Recordings.

Cointreau — the orange liqueur used in “The Original Margarita” recipe and numerous other cocktails — is hosting a series of “Margarita Mondays” for users of Bumble Date and Bumble BFF in New York, Los Angeles, Chicago and Austin, Texas during May and June.

When Bumble matches are made within those regions, the match couple receives an offer to attend one of the free events, which feature margarita-making classes meant to encourage the couple to bond over an enjoyable activity.

In addition, Bumble users within those regions who don’t necessarily get a match may receive "Margarita Monday Guides" that identify destinations in those areas where they can use a special offer for Cointreau margaritas.

The first event, in New York, pulled a capacity crowd and a 300-plus waiting list, according to the brand.

The events are an extension of Cointreau’s ongoing “The Art of the Mix” campaign. LaForce is the brand’s agency of record.

Other branded events, social and digital media content, and advertising are also part of the partnership.

The partnership is part of Courvoisier’s “Honor Your Code” campaign.