Wells Fargo Partners With GIPHY For GIFs About NBA Playoffs 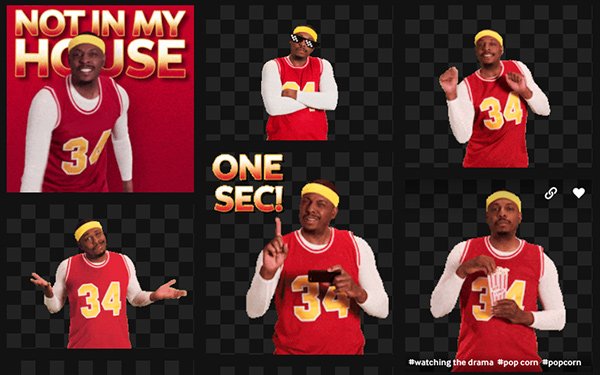 Wells Fargo has partnered with GIPHY to co-create a custom GIF ad campaign for the NBA Playoffs and Finals.

The GIFs were created by GIPHY Studios, the company’s in-house creative agency, which houses a team of about 120 people.

GIPHY gets over a billion searches a day. Brands can also pay to have its GIFs placed at the top of some of those search results.

For example, if one of GIPHY’s users types in “mic drop” to find a GIF to send to a friend, Wells Fargo’s GIF starring Pierce dropping a microphone is the first to appear in the search results.

Alex Magnin, GIPHY’s head of revenue strategy, told Publishers Daily this is a new way to "monetize messaging, as a user behavior." Seventy percent of searches for GIFs from GIPHY are conducted in messaging apps, he noted. Brands can become part of users’ private conversations “because they want you there."

Wells Fargo worked with ad agency BBDO and GIPHY Studios to identify cultural and sports-related phrases that people are using to talk about the NBA Playoffs online today, resulting in GIFs like “that’s what I’m talkin’ about” or “mic drop.”

(All of the Wells Fargo GIFs created by GIPHY Studios with Paul Pierce can be foundhere.)

The GIFs are available on all GIPHY’s platforms and everywhere GIPHY is integrated, including Instagram, Snapchat, Twitter and iMessage, for example.

Wells Fargo will also promote the content via social and influencers.

“GIPHY integrated into all the major platforms makes the discovery process to find our content quite easy,” Michael Lacorazza, executive vice president and head of integrated marketing at Wells Fargo, told Publishers Daily.

“With organized paid search and promoted content we could spend a little money to get our content out in front," he added.

Wells Fargo’s own brand campaign launched in January, and to connect with “big and engaged audiences,” the company invests in creative around sports, music and art throughout the year.

“The NBA Playoffs and Finals is one of our tentpole media events for our brand campaign,” Lacorazza said.

Wells Fargo wanted to reach sports fans beyond “the original approach of buying 30-second ads… to drive you into [Wells Fargo's] website or mobile app,” he added.

Wells Fargo looked at the behaviors of super fans around basketball, and found a big part of engagement around the sport is chatting with friends in real-time during games.

GIPHY was a way for Wells Fargo to reach an audience through chats with their friends, with scale, Lacorazza said.

The partnership is a “learning experience."

“We hope to see scaled level of engagement with our content,” Lacorazza said.

The company is undergoing internal studies to measure brand lift around its NBA efforts and what tactics work better than others.

“Now, they are more searchable with scale," Lacorazza said.

GIPHY has previously partnered with other finance companies -- it partnered on a campaign for Quickbooks starring Danny DeVito earlier this year.