When It Comes To Attribution, It Feels Like TV Is Selling Last Year's Model

One of the most interesting developments I have seen in the video advertising marketplace over the past couple of years has been the rapid acceleration of TV attribution modeling, and for the life of me, I couldn’t really understand why.

Sure, TV has long used models. In fact, the original marketing-mix models were developed mainly to measure and adjust the efficacy of big TV advertisers and it was only a matter of time before digital embraced the science of modeling and made it its own. But digital did it out of necessity, because it lacked the kind of currency-grade audience-ratings data that TV had and needed a better way to correlate media exposure with consumer actions like clicks, downloads, “conversions,” purchases and repurchases.

So when attribution modeling became the rage in the TV industry over the past couple of years, I figured it was just a way to placate the digital native side of advertisers and agencies that needed it as a rationalization to buy a mass reach and awareness-building medium like television. And that whether it was necessary or not, it couldn’t hurt. I was wrong.

I learned just how wrong I was when I sat in recently on one of Mitch Oscar’s so-called “Secret Society” meetings hosted by U.S. International Media in its Midtown Manhattan offices.

The meeting convened local TV sales, technology, data and attribution modelers to discuss how and why they have gotten into the modeling game, what their results have been so far, and perhaps most importantly, what the big issues are that they’re facing.

While there were some great success stories, like the woman from one major broadcast group who said their use of attribution models has enabled her local sales teams to crack some new categories, including a “stairlift” company whose attribution models demonstrated some lifts in brand awareness and sales.

But for all the reinforcing anecdotes I heard, it felt like TV attribution has a long way to go for local broadcasters, both technically and culturally. Many of the speakers discussed how hard it has been educating local sales staffs steeped in “spots and dots” ratings logic, as well as their customers, in the concept of modeling -- and especially the science of it.

Another big problem is that some of the science may not be that good, and it certainly isn’t as consistent as what digital suppliers have developed over the years.

“It felt like they are doing what the digital companies were doing eight years ago,” said Russell Zingale, president of USIM’s eastern region and the meeting’s host.

“It felt like they’re still working in silos,” he added, noting the disparate tools and methods being used across different local TV sales organizations, as well as the cultural issues within them.

To some extent, that is to be expected given that the science of attribution modeling is relatively new to local TV advertising, but given that the meeting included some of the industry’s leaders, it felt to me, anyway, like TV is playing catch-up.

Even worse than the level of sophistication is the fact that they may just be getting the science wrong altogether.

In fact, Zingale shared an anecdote with the attendees that illustrated exactly that point.

Zingale described a test campaign USIM ran for tourism client Aruba in April and May on a national addressable TV advertising platform.

“They came back with a brand lift study showing traffic to the aruba.com website,” he recalled, adding: “And of the 10 markets they’re serving, four of them had what I’d refer to as ‘negative increases.’ They went down.”

Zingale’s point is that it would be counterintuitive for TV advertising to lead to a decrease in consumer behavior, noting: “It should either be flat or an increase.”

More importantly, the net finding of the analysis was that the agency and the client would actually do better NOT to advertise on TV.

And if that’s the case, maybe it would be better for the TV industry NOT to trumpet its attribution models until they have modeling science that’s at least as good as digital’s.

“I used that example with the group here, because it seems like they’re working in a vacuum,” Zingale explained, adding: “I told them you need to go back to the basics and understand what the overall media mix and awareness-building properties of a reach medium are and try and fit that into how you’re selling this.”

In the meantime, he said USIM is not abandoning the initiative and plans to hold another TV attribution model summit organized by Oscar in early July, but he said the focus would be on everyone getting on the same page with the first step of at least coming up with a “common language” or a glossary for the terms about the inputs and outputs being used by different local TV advertising attribution modelers.

“The first step is developing a commonality of terminology being used,” he said. “Everyone is talking about attribution and uses a lot of terms, but in a lot of cases they mean something completely different. Having a glossary of terms is really needed.” 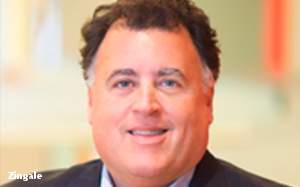