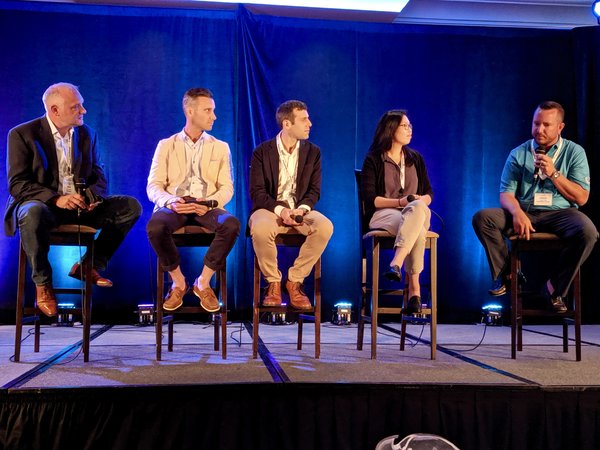 Brendan Cleary, VP of Programmatic Sales & Ad Operations at The Guardian (second from left), put it down to performance. "News can be challenging in terms of content," he said, adding that it's about putting brands in a positive light.

Jason Tate, Director, Programmatic and Partnership Development at MediaNews Group (far right), home to 100 newspapers, says he simply asks a brand "what do you need to come back," meaning he maintains flexibility in order to get advertisers to return.

And, Jeff Lustig, Manager, Programmatic Operations, News Corp/NewsIQ (center), pointed to data and audience, saying that on the flip side one has PMP buyer insights. "We tie our data together to give insight to buyers, how to win the war. We give some actual guidance."

Tate said his MO is to remain "partner agnostic. Have everything available so you can be as flexible as possible." He pointed to Target as an example, saying that Target has about 20 blocks, or news stories against which it doesn't want to be placed. "So there goes our whole website except for entertainment," he joked.

On the other hand, some advertisers want only to be placed against some news. For example, Tate pointed to the Boston Herald, one of MediaNews Group's holdings. With MGM looking to put a casino in Springfield, Mass., to compete with the Connecticut casinos, the brand wanted to be associated in the Heraldwith anything to do with Tom Brady or the Patriots. Tate said, "I'd always throw 10% inventory to make sure that a campaign delivered and kept coming back."

Cleary described PMP as non-guaranteed. "You're opening the door for the brand to access inventory or audience. There are no contracts in place." Regarding news safety he said he works out deal with brands to make sure they only in, say, the lifestyle section.

In 2015, The Guardian underwent a site redesign and reduced ad space by 30%, he said. "The focus was on the user; less is more." At first, it seemed a liability but, in fact, it created scarcity. "DSPs were first to realize they had to fight more to win more inventory. In the long term, we ended up making more money."