Brands Display Their Pride Cred With A Rich Tapestry Of Initiatives 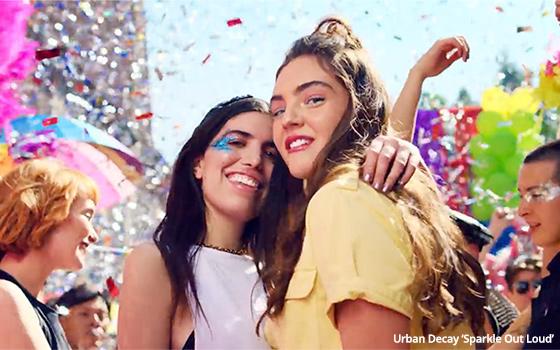 An array of brands are throwing their support behind the LGBTQ community with special campaigns and initiatives timed to Pride Month.

Urban Decay is partnering with Vice Media agency Virture to raise awareness for the cosmetics brand's Heavy Metal Glitter Collection through "Sparkle Out Loud." The spot features dancers, performers, drag artists and other prominent members of the LGBTQ+ community — all dressed up in Glitter Rock — celebrating themselves and their intersectional identities. The campaign runs on digital, social, OOH and in stores.

Urban Decay is also partnering with The Stonewell Foundation to introduce a special Glitter color, with 25% of the proceeds benefiting the group.

Equinox and agency RanaVerse are celebrating Pride and the New York City Ballroom community by “voguing,” the dance probably best known through Madonna's iconic song. “Life’s a Ball” shows transgender icons dancing solo in a frame surrounded by others, each showcasing one element of vogue performance, such as a dip or hair whip.

To further expand this concept, Equinox is hosting in-studio Voguing Master Classes and the lifestyle/fitness brand has partnered with House Lives Matter as part of the advocacy group's first-ever brand partnership. For every post using #PoweredbyPride or a GIPHY sticker from the campaign used in the month of June, Equinox will donate $1 to House Lives Matter. Equinox also donated all ticket sales from its June 8th Master Class to the organization.

RanaVerse is also working with Coach to focus on the five decades from the origin of the Pride Celebration through the present day. The "Fifty Years Proud" creative, overseen by Coach's in-house team, explores this history through dance with choreography by Tanisha Scott.

Forthcoming content in the series includes interviews with members of the LGBTQ+ community discussing key cultural milestones in the community’s history. The interviews feature key figures from each decade, such as Jay Toole, who was an eyewitness to the Stonewall Riots, as well as Charlene and Cynthia Russo.

Kind bars changed its packaging for the first time to introduce Kind Pride with rainbow colors. Proceeds will be donated to the Ali Forney Center, the nation’s largest organization dedicated to homeless LGBTQ youth. The bars are exclusively available on www.kindsnacks.com through the end of July.

SodaStream's in-house team is releasing a new campaign that tweaks historical images from the past to include more inclusive moments. In the "Imagine a world" creative two blue-collar workers, for instance, are shown kissing each other while a military pin-up model's tattoo shows another female.

Travelzoo is commissioning designer Darlene Cordero, who is a member of the LGBTQIA+ community, to recreate its logo in celebration of Pride. The travel brand is also making a donation to GLAAD, as well as offering international and domestic LGBTQIA+ friendly travel deals keyed to the latest Rainbow Index, a guide to more inclusive and welcoming destinations.

Lyft and its in-house shop are recognizing this community with the "Two Is Too Few" film, edited by Ben McCambridge at Cut+Run. It will stream online and via social channels.

Lyft is also introducing pronouns to its passenger app and is supporting its transgender drivers by offering $200 in financial support for name change fees, executed in partnership with the National Center for Transgender Equality (NCTE).

“The fight for equality is a community effort and this was our opportunity to model how brands can use their influence to create bodies of work that push the popular cultural narrative to amplify, uplift, and serve marginalized voices,” says Jane Goodwin-Bell, Creative Copywriter, Lyft.