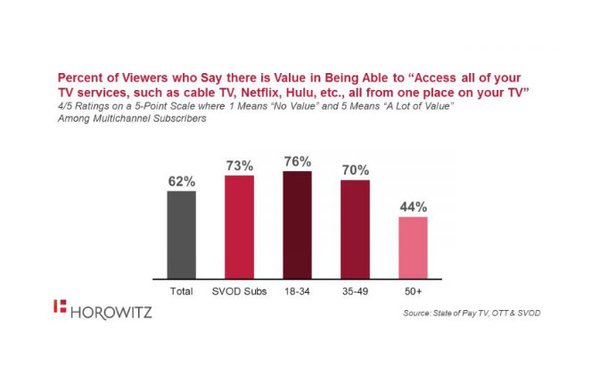 As we’re all acutely aware, media giants including NBCUniversal, Disney, WarnerMedia and Apple are poised to escalate the streaming wars with new platform entries.

Putting aside, for the moment, the questions around free/ad-supported, paid or hybrid offerings, what has become increasingly clear is that consumers are already confused and frustrated by the sheer number of options available: More than 300 in the OTT sector alone.

But there are inconvenient codicils. Nearly half (47%) of consumers said that they're already frustrated by the number of services and subscriptions needed to watch what they want, and even more (49%) said that the volume of available content makes it difficult to decide what to watch. Most said they know what they want to watch more than two-thirds (69%) of the time, but 48% said it's difficult to find content across services (and when the search exceeds a few minutes, half give up).

Horowitz Research’s State of Pay TV, OTT and SVOD 2019 survey, conducted in early 2019, confirms consumers’ strong and increasing desire to be able to access all of their content, across platforms, from a central location.

Among multichannel (MVPD) subscribers polled as part of a nationwide survey of TV content viewers 18 and older (weighted to be representative of the overall TV universe), 62% said that the ability to access all of their multichannel service and SVOD services from one place on their TVs would have high value. (See chart above.)

And among SVOD subscribers who are also multichannel subscribers, 73% rated services centralization as high-value.

In addition, 55% of multichannel subscribers (including 64% of SVOD subscribers) said that they would view a search capability across all of the video services they use through their cable/satellite TV provider as valuable: 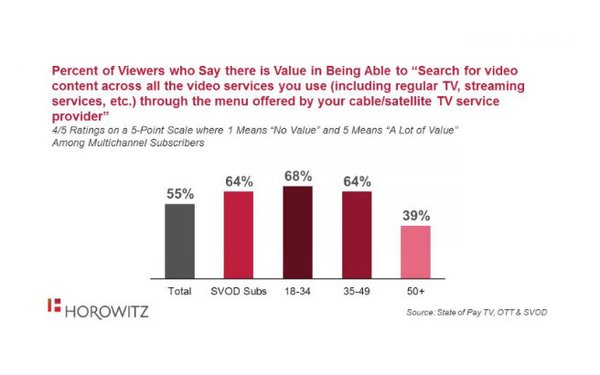 One obvious conclusion from all of this, as Deloitte’s Westcott pointed out, is that there's a major opportunity for big platforms to reaggregate services to enable providing access and interest-based recommendations across platforms, without having to switch devices or apps.

“The traditional position of the MVPD is, ‘You are my subscriber — everything you do comes from me,’” wrote Howard Horowitz, president of the research firm, in a blog post discussing the survey results and a panel discussion held during June’s 2019 TV of Tomorrow show. “That’s been the key to success for decades,” and the industry’s long-embedded “me first” mentality isn’t very likely to change, he noted.

However, “simple survival in the multi-network, multi-device, multi-show, multi-everything space may require the industry to reckon with the fact that the value of a subscriber (or loss thereof) may be greater than the value of ‘control’ of what the subscriber sees and does every day within their own walled garden,” Horowitz posits.

He even suggests that this survival imperative could eventually force an attitudinal evolution that allows for a concept of “home base,” from which users are free to roam the viewing universe, and part of a platform’s value is that it makes it easier for them to do this.

Despite their demand for cross-platform navigation, most consumers probably wouldn’t be willing to pay extra for this ability, he adds — but would likely consider it an important “value add” to any MVPD or aggregator service offering.

Experts on the panel — including executives from Comcast (whose Infinity X1 platform enables access to multiple apps, including through voice control) and the service aggregation and content recommendation platforms Caavo and Samba — agreed that there is no single, ideal solution, because viewing habits differ by device as well as viewer.

The good news: In focus groups conducted for Horowitz’s research, consumers indicated that while universal search is important, they also value being able to search within specific services, because each has its own “personality.”

So maybe cooperating to address viewers’ needs doesn’t have to equate to the brand blurring feared by the service providers.

They’ll have to figure that out, because as always, consumers’ natural demand for solutions that are convenient and respectful of their limited time inevitably will have its Darwinian effect.

Horowitz’s bottom-line conclusion seems undeniable: “The platforms, devices and services that enable all consumers to watch all their movies and shows from one library without having to switch apps and devices will win.”