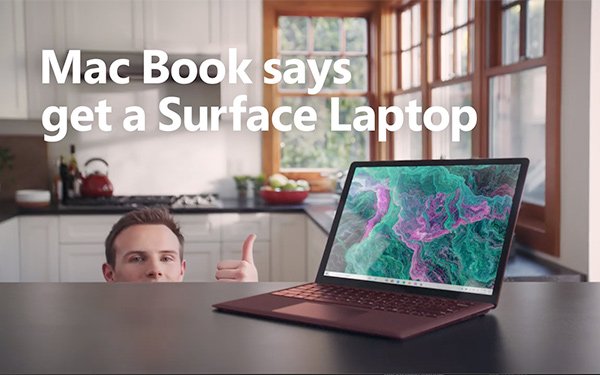 It seems Microsoft is at it again, mocking Apple with its latest advertising campaign.

Microsoft introduced Mackenzie Book, an Australian from Sydney who goes by the name of Mac. In the 30-second video clip posted to YouTube Wednesday, Microsoft asked Mac Book to compare the Surface Laptop 2 to the MacBook Air.

On Thursday, Apple began sending emails to its product users promoting the MacBook Pro with Touch Bar and Touch ID, aimed at increased productivity. It touts a machine with an 8-core Intel processor, up to 5.0GHZ turbo boost, 32GB of memory and supporting up to 3.2GB/s SSD read speeds.

Most know Microsoft and Apple have a torrid history of dissing each other’s products. During the holidays, Microsoft went after Apple with its Surface Go 2018 Holiday Ad. It focused on how big dreams need a real computer like Surface Go to realize them.

The ad tells Grandma not to buy a new iPad, because it was fine at age six, but now the grandchild is age 10 and needs a real computer.

For those who like nostalgia, there’s a video with 30 years of ads focusing on Apple and Microsoft. The early ads, "1984," from Apple talk about storage, and drawing pictures and conclusions. Then there were more than 60 Mac vs. PC ads, also posted to YouTube.

In the latest Microsoft ad, Mac Book tells viewers: “You should get a Surface. Trust me, I’m Mac Book.”