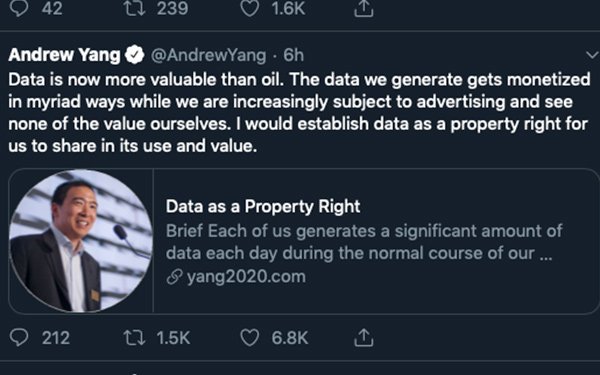 Democratic Presidential hopeful Andrew Yang said that if he is elected, he would put laws in place to “establish data as a property right” to help share the value of its use in advertising and contribute to the way the government measures the economy.

“Data is now more valuable than oil,” he wrote in a tweet. “The data we generate gets monetized in myriad ways while we are increasingly subject to advertising and see none of the value ourselves.”

Yang believes that as an economic measurement, the metrics should include not only data given up by U.S. citizens, but quality of life, life expectancy, happiness, mental health, student debt, and a variety of other factors.

Yang also wants to redistribute wealth, to take from companies that have benefited from automation and give to the poor, rather than forcing people to work for what they earn.

On Yang’s website, he estimates that new technologies such as robots, software, and artificial intelligence have taken more than 4 million U.S. jobs from workers. Within the next five to 10 years, these technologies will eliminate millions more, according to his site.

He believes that one-third of American workers are at risk of permanent unemployment. This time, he writes, when the jobs go they will not come back.

Yang is an entrepreneur who wants to implement what he calls the Freedom Dividend, described as universal basic income for every American adult over the age of 18. He said every adult will receive $1,000 a month, paid for by a new tax on the companies that benefit most from technology and automation.

Yang has been getting backlash from previous supporters, but one person who appears to have stuck with him is Tesla founder and CEO Elon Musk. In a short tweet, Musk said “I support Yang,” in reply to a tweet from Dan Carlin, who goes by the Twitter handle @HardcoreHistory.