As Walmart Wrestles With Gun Stance, Is Brand At Risk? 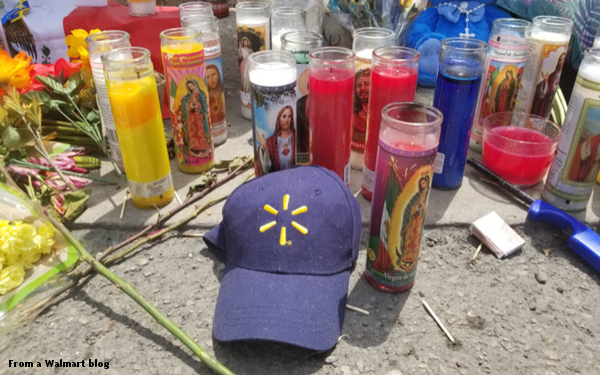 Recent events are challenging the Walmart brand as never before, and CEO Doug McMilllon seems well aware the company is tap-dancing through a culture-wars minefield.

The company is still reeling from recent shootings: the murder of 22 people at a Walmart in El Paso, Texas on Aug. 3, and the killing of two Walmart managers in Southaven, Mississippi on July 30.

McMilllon used the company’s earnings conference call today to reiterate concerns about violence while defending its record as a responsible marketer of firearms and ammunition.

“Our hearts continue to be with our associates in El Paso and Southaven and we are focused on the safety of our associates and customers in all our stores and clubs,” he said, in remarks prepared to discuss its better-than-expected second-quarter results. “Those tragic and painful events will be with us forever, and our hearts go out to the families that were impacted.”

“Walmart is between a rock and a hard place,” says Robert Passikoff, founder and president of Brand Keys, a customer loyalty consultancy. Pressure is building for Walmart to get out of the gun business altogether, with employees staging walkouts. Outside groups including America’s largest teacher’s union are threatening boycotts, also calling on the retailer to start gun buyback programs and stop funding candidates backed by the National Rifle Association.

On the other side, conservatives and rural gun owners represent an important part of the company’s consumer base.

It doesn’t help that the Bentonville, Arkansas-based retailer continues to be a magnet for trouble, with a rash of unsubstantiated bomb threats causing store evacuations. Earlier this week, a man walked into a St. Louis-area Walmart with a rifle, a handgun and body armor, in what he claims was a “social experiment.” Predictably, panic ensued.

It seems logical that at some point, the negative publicity might frighten people away, with disastrous results. Walmart is intensely dependent on foot traffic, and even small declines impact sales. Passikoff doesn’t see that happening. “People forget pretty quickly, once these incidents fall out of the news,” he says.

But boycotts and hashtag activism do have some impact, even if it’s slow. “Look at Ivanka Trump’s brand,” he says. “Movements like #GrabYourWallet helped shut it down.”

So Walmart isn’t impervious to pressure, and public opinion is shifting. The Washington Post quotes a recent GQR survey of 2,000 likely voters, which finds that one in four people say they have changed their opinions on guns in the last five years. Of those, 78% of Democrats and 70% of Republicans say they now support stronger laws.

Sporting-goods retailer Dick’s, which attracted plenty of negative publicity from gun-rights advocates for its decision to stop selling guns completely after the Parkland shootings, “is doing fine in our loyalty index,” Passikoff says. “That decision hasn’t hurt them a bit.”

In his remarks, McMilllon reiterated the steps the retailer has already taken, many of them offensive to supporters of gun rights. It gave up selling handguns (except in Alaska) decades ago, and no longer stocks military-style rifles, including the AR-15. In response to school shootings, it raised the age limit for both guns and ammunition to 21 and has stricter-than-required procedures for background checks.

But it is still among the top three sellers of firearms in the industry, and McMilllon says the company estimates it represents 2% of the market, and a 20% share of ammunition.

McMilllon says the retailer will keep looking at ways to reduce gun violence. “We will strive to use these experiences to identify additional actions we can take to strengthen our processes, improve our technology and create an even safer environment in our stores,” he says. “We’re also thinking through the broader issues related to gun violence and things we should do to help create safer communities.”

Passikoff isn’t holding his breath. “It is rare for large corporations to take a moral position that might hurt, financially,” he says. But he draws a comparison to the slow movement to pressure South Africa to end apartheid, which began back in the 1970s. “At first, companies resisted,” he says. “But eventually, as public opinion grew stronger, they changed their policies.”

So far, there is no sign of trouble at Walmart’s cash registers. Walmart’s second-quarter revenue climbed 1.8% to $130.4 billion. (On a currency-neutral basis, sales rose 2.9%.) Comparable-store sales advanced 2.8%.

As expected, operating income fell, coming in at $5.58 billion for the quarter, from $5.75 billion, partly due to costs associated with its FlipKart acquisition in India. But the decline was less than had been forecast.

It’s also gaining steam on its many omnichannel initiatives, with 1,100 grocery delivery locations in the U.S., and more than 2,700 pickup locations. Walmart.com’s NextDay delivery service, perhaps its most direct challenge to rival Amazon, now covers about 75% of the U.S. population.