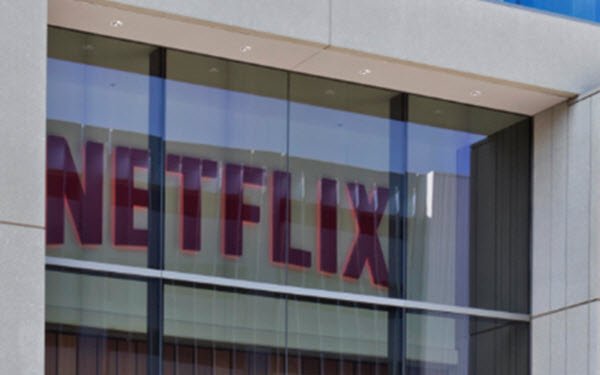 Netflix still reigns in the U.S. streaming sector, but it will continue to see some erosion of its dominance in the years ahead, as the field of competitors grows more challenging, according to the latest OTT forecast from eMarketer.

The forecast, focusing on the major players in the sector, is based on sources including quantitative and qualitative data from research firms, government agencies, media firms and public companies, plus interviews with top executives at publishers, ad buyers and agencies.

eMarketer estimates that 182.5 million people (55.3% of the U.S. population) will view content through OTT subscriptions in 2019.

“The market for streaming video has been driven by an explosion in high-end original content and low subscription costs relative to traditional pay TV,” summed up eMarketer forecasting analyst Eric Haggstrom. “A strong consumer appetite for new shows and movies has driven viewer growth for services like Netflix, Hulu and Amazon Prime Video, as well as the broader market.”

Netflix is projected to see 7.6% viewership growth this year, despite having experienced its first decline in U.S. subscribers in eight years during this year’s second quarter. 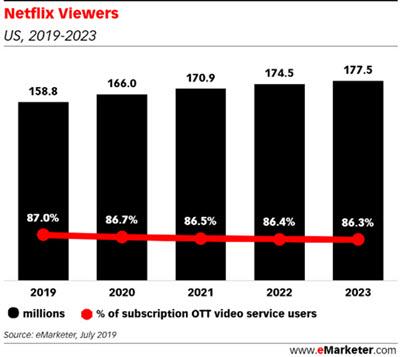 Although eMarketer doesn’t expect Netflix to lose subscribers, it does expect the service to find it harder to grow as it increasingly saturates the market and faces new competitors including Disney+, Apple TV+ and HBO Max in the coming months.

(Netflix CEO Reed Hastings, however, has noted that with an estimated 10% of all U.S TV viewing, the service still has ample room to grow in the domestic market, noted Deadline.)

“Netflix has faced years of strong competition for viewers, coming from streaming video platforms, pay TV services and even video games,” stated Haggstrom. “While there is no true ‘Netflix killer’ on the market, Disney’s upcoming bundle with Disney+, Hulu and ESPN+ probably comes closest. Netflix’s answer has been to stick to what has made it the market leader — out-spending the competition on both licensed and original content, and offering customers a competitive price.”

However, those services will of course take time to build a subscriber base, and Netflix’s large and expanding library of hit original TV series is a major advantage, he pointed out.

While Disney+ will boast blockbuster movies, “many of those have already sold to other streamers, and those contracts can last a few years,” so Disney+ won’t have access to its full catalog at launch, Haggstrom told Forbes.