'Tis The Season For Billboards Promoting The New Fall Shows 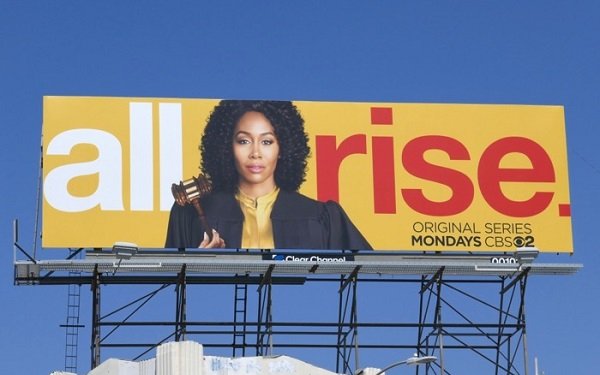 New York City is in the grip of an attack of “Evil” buses.

These are not multi-passenger vehicles with malevolent intentions (as far as anyone can tell). Instead, they are New York City buses with simple billboards posted on their front ends just under the front windshield with the simple word “Evil,” which happens to be the title of a new CBS show premiering soon.

Thus, when these blue buses are coming toward you, all you see is their fronts with this word “Evil” on them -- a visual that can be mildly disconcerting, especially if you are about to board one of them.

Welcome to the fall television marketing season, when outdoor billboards for the new fall shows in our big cities are as sure a sign of autumn as the leaves changing color.

Here in New York, the new fall TV shows are being ballyhooed on new billboards everywhere you look -- on rooftops, the sides of buildings, on buses (front, back and sides), cab roofs, subway stations, bus shelters and payphone kiosks (yes, they still exist, probably just for the ad revenue they can still bring in).

The billboards come in a wide range of shapes and sizes. And thanks to advances in the technology of outdoor (i.e., out-of-home) video capabilities, much of the advertising one encounters for the new fall shows when traveling around New York City consists of live-action video.

As a matter of fact, a number of subway stations are currently in the midst of a changeover from static billboard advertising spaces (on which posters are still pasted up the old-fashioned way) to video screens. Like most things concerning the New York subway system, this refitting process will likely take years, due to the number of stations.

With its omnipresence on the front ends of city buses, “Evil” seems like the most noticeable of the new fall TV shows getting the outdoor-advertising treatment in New York. This observation is based solely on personal experience -- which is kind of how most people come into contact with this type of advertising.

“Evil” is the new CBS drama about a group of sleuths who work for the Vatican investigating the legitimacy of various phenomena such as miracles and visions. At least, this is what I think this show is about. All the billboards really tell me is the show’s title.

Another show whose title and star are ubiquitous in the visible advertising streetscape of New York this month is “Stumptown,” starring Cobie Smulders as a kick-ass, unorthodox detective. I have no idea where Stumptown is, and the billboards do not include a device such as a map inset, for instance. Remember them? Maps, I mean.

Meanwhile, “All Rise” -- pictured on a billboard above (I think the photo is from L.A., not New York) -- is a new courthouse drama on CBS starring Simone Missick as a judge. She is a striking actress, and serves as a fitting centerpiece to this simple billboard.

In New York, however, the “All Rise” phrase is closely associated by many with the Yankees’ slugger, Aaron Judge. The phrase is often invoked by local sportscasters and news anchors when they are about to introduce a video clip of his latest home run.

This is because his last name is “Judge.” Get it? It is possible that some New Yorkers will see billboards for “All Rise” and wonder if the show is about Aaron Judge, and not just any judge.

Many of the new fall shows are featured in the giant animated billboards that line both sides of Times Square in New York and on 42nd Street. In a way, these “spectaculars” (as the Times Square mega-billboards are sometimes called) seem too big to promote mere TV shows.

But for the stars of the shows, it must be gratifying to see their names and faces looming large over the bright lights of Broadway. To paraphrase the famous song (“New York, New York”), if they can make it here, they can make it anywhere.

All rise for the new fall television season, premiering officially on Monday, September 23.