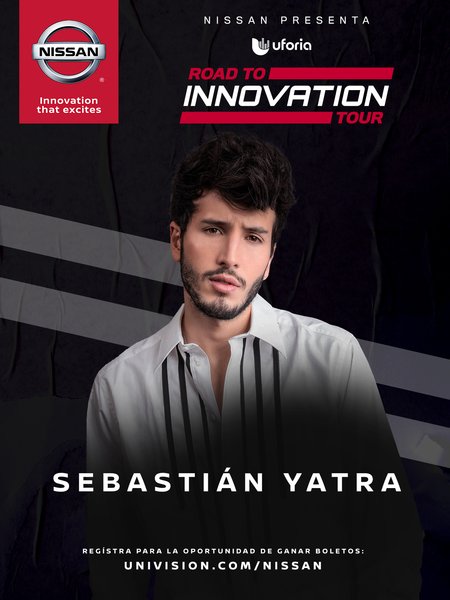 Nissan and Univision are partnering for a fifth year for a live concert tour, which includes a ticket giveaway component.

Headlining the “Road to Innovation” series is Latin Grammy Album of the Year Nominee Sebastián Yatra. The eight-city, 16-day tour kicks off in Los Angeles Oct. 28 and concludes in Las Vegas on Nov. 12.

Fans can register to win tickets at univision.com/Nissan. New this year, Univision will create a branded Uforia playlist featuring past “Road to Innovation” tour artists.

Sebastián Yatra is the latest in a list of chart-topping artists to lead the tour, joining previous event headliners Karol G with special guest Reykon, Juanes, Farruko, and Yandel.

The longevity of the sponsorship affirms that music is a powerful tool to connect with Hispanic consumers, said Allyson Witherspoon, Nissan North America vice president, marketing communications and media.

“Through the Road to Innovation tour, we have delivered 35 concerts across the country and brought thousands of Latin music fans together to celebrate their favorite artists,” Witherspoon tells Marketing Daily. “Rallying around such an important passion point has allowed us to develop a deeper, more meaningful relationship with this key audience.”

Each leg will have a complete branded experience and will feature Nissan and Univision brand ambassadors and influencers on location stationed throughout the concert arena for increased engagement and data capture via one-on-one interactions with concertgoers.

Along with the live concert experience, Univision will provide cross-platform promotional support for the event across its owned=-and-operated television and radio properties, as well as through custom content developed exclusively for its digital and social platforms.