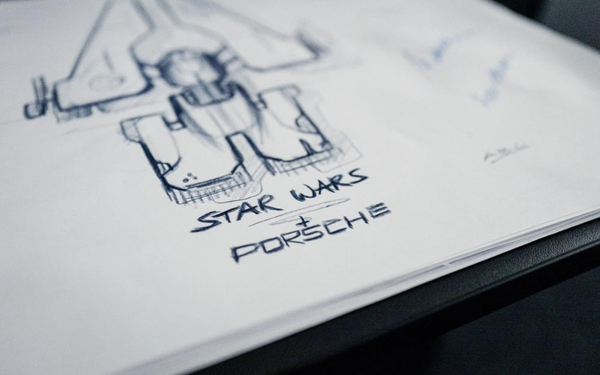 Porsche is the latest automaker to jump on the Star Wars bandwagon.

The automaker and Lucasfilm are jointly designing a starship. The collaboration includes a partnership with Wired to document the design process, a website devoted to the project and several “teaser” videos similar to one launched quietly last week on Instagram which already has 339,640 views.

A new video, “Twin Tests” launched this morning, featuring the Porsche Taycan and an X-Wing being tested in respective wind tunnels. The ship resulting from the collaboration will be inspired by the Taycan, Porsche’s first all-electric auto.

The partnership comes at a seminal moment for both parties, with Porsche introducing its first all-electric vehicle and the Star Wars universe concluding its Skywalker saga.

The collaboration goes beyond typical product placement “to merge a shared belief in design to make something authentic to both brands and their fans,” according to the automaker.

“Developing a spacecraft with clear Porsche design DNA is exciting and challenging,” says Michael Mauer, vice president style Porsche at Porsche AG, in a release. “Even though they do not seem to share many elements at first glance, both worlds have a similar design philosophy. The close collaboration with the Star Wars design team inspires and fascinates us -- I’m sure that both sides can draw major benefits from this exchange.”

Rockets to the Moon (RTTM) is the entertainment strategy agency that secured the overall deal with Disney, which owns Lucasfilm. The project idea came from RTTM. As creative AOR for Porsche, Cramer-Krasselt was brought in to further develop the strategic and creative ideas of the designer alliance project and the surrounding content. C-K co-lead with RTTM and brought the idea of the wind tunnel in Twin Test while Disney/Lucasfilm lead production in effort to bring them to life. PHD handles the media (the partnership with Wired).

Fans can follow the development process of the starship online at www.thedesigneralliance.com, which features the design team of Mauer and Doug Chiang (vice president, executive creative director, Lucasfilm) working on the project.

The design team will meet regularly in Stuttgart and San Francisco, California, over the coming weeks to design the spacecraft and create a corresponding model.

Additional content will be released over the coming weeks to tease the alliance, building up to a documentary-style film and an unveiling of the ship at the Star Wars: Rise of Skywalker premiere in December.

Porsche will also be showcasing the Taycan, which launched in early September, at the event. Deliveries to the U.S. market will start at the end of the year, coinciding with the film’s release.

“The worldwide appeal of the Star Wars and Porsche brands is shaped decisively by their iconic designs,” says Chiang, who is responsible for overseeing all designs for the Star Wars franchise, in a release. “We are bringing together two worlds with this project: the exotic film design of a galaxy far, far away and the precision work that goes into developing emotive Porsche sports cars. This collaboration promises to produce an innovative design that will blend the best of both brands to create an exciting new starship worthy of Porsche and Star Wars.”