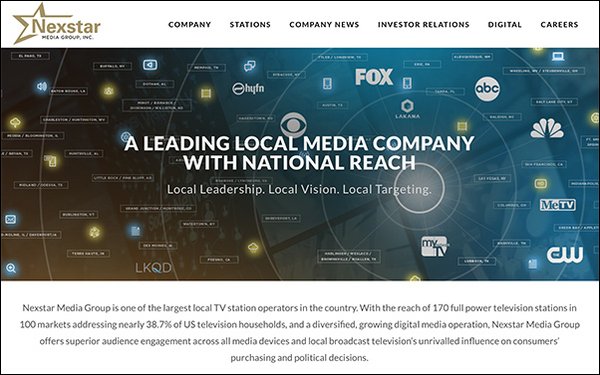 Following other TV groups, Nexstar Media Group’s broadcasting unit, one of the largest owners of U.S. TV stations, will move to a cost-per-impression (CPM) model from household ratings for selling advertising.

Earlier this month, TV station groups such as NBCUniversal,CBS, ABC, Hearst Television and Gray Television have said they would switch to impression-based TV advertising selling.

The Television Bureau of Advertising, the trade group for U.S. TV stations, is urging an industry-wide change to viewer impressions-based advertising deals by January 2020.

Since 2018, Nexstar says it  has been working with its audience measurement partner Comscore, to begin unified measurement metrics showing advertisers unduplicated audience across its platforms -- broadcasting, digital, mobile, and streaming video platforms.

However, Ed Papazian, president of Media Dynamics, commented to MediaPost’s TV Watch earlier this month that he doesn’t believe bundling digital and linear TV impressions will fly with advertising buyers:

“Assuming that they accept the sourcing for the digital exposures, the buyers will want these expressed as GRPs separately from their TV counterparts so whatever adjustments that are required can be made. Moreover, when makegoods are offered to compensate for rating shortfalls, I doubt that the buyers will accept "digital" impressions as surrogates for TV "impressions."