'Terminator: Dark Fate' Lives Up To Its Name At The Box Office 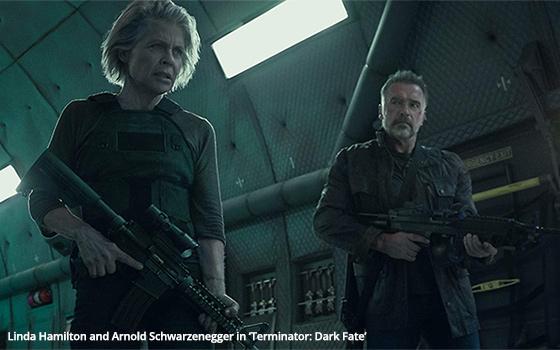 “Terminator: Dark Fate” may have lived up to its name -- but not in a good way when it comes to the theatrical movie business.

The big-budget film, a partnership of Paramount Pictures/20th Century Fox/Skydance Media, opened this past weekend with a woeful $29 million in U.S. box-office revenue and $95 million in international revenue -- far below analysts' projections.

National/regional TV advertising spend for the latest in the longtime franchise was $28.7 million since May, with $13.3 million in last two weeks, according to iSpot.tv.

Much of its TV efforts were focused around male-focused programming, including NFL Football (on Fox, CBS, NBC, Fox, and ESPN); NBA Basketball (TNT); “The 2019 World Series” on Fox; and ESPN’s “Sportscenter.” There were 2,278 commercial airings of the movie.

Six cable TV networks ran co-branded promos for the movie. The bulk of these airings were on Viacom cable networks: VH1, Comedy Central and Paramount Network.

VH1 had 82 airings of a promo, followed by Paramount Network with 25 airings; Comedy Central at 14 airings; Discovery with 32 airings, History at 19 airings and Bravo with four airings.

Restaurant chain Dave & Busters ran a “Terminator: Guardians of Fate” commercial, touting an aligned virtual reality game at its restaurants with the film franchise just before its launch. There was also exposure on Xbox’s Gears 5 video game.

Reports suggest the three partners, each with a 30% stake, could lose a total of $120 million on the film. (China's Tencent had a 10% equity interest in the movie.) The overall budget for the film was estimated to be $185 million.