Journalists Give Highest Marks To Twitter, Google For Combating Disinformation 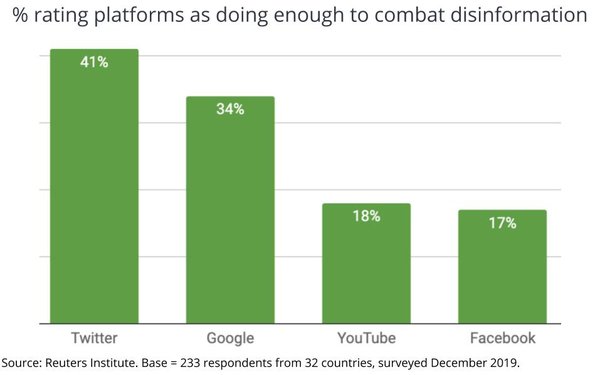 Publishers of journalism worldwide give the highest marks to Twitter for combating misinformation and/or disinformation, according to the 2020 edition of an annual study by the Reuters Institute and the University of Oxford.

The findings, which are based on a survey conducted in December 2019 of 233 journalism publishers from 32 countries, found that 41% of them think Twitter is doing an adequate job of combating disinformation on its platform. That's a significantly higher percentage than the No. 2 platform, Google, and even a wider margin over YouTube and Facebook.

Only 17% of the publishers give credit to Facebook for its efforts, which may not be surprising, given negative news coverage surrounding Facebook's lax controls and controversial policies.

"Google’s higher score is reflective of the large number of publishers in our survey who are current or past recipients of Google’s innovation funds (DNI or GNI), and who collaborate with the company on various news-related products," writes the report's author, Nic Newman, senior research associate at Reuters Institute for the Study of Journalism.

"Facebook’s lower score," he adds, "may reflect historic distrust from publishers after a series of changes of product strategy which left some publishers financially exposed. In the last year, however, Facebook has stepped up its commitment to journalism, with several new product initiatives as well as a commitment to invest around $300m in journalism-related initiatives over the coming years." 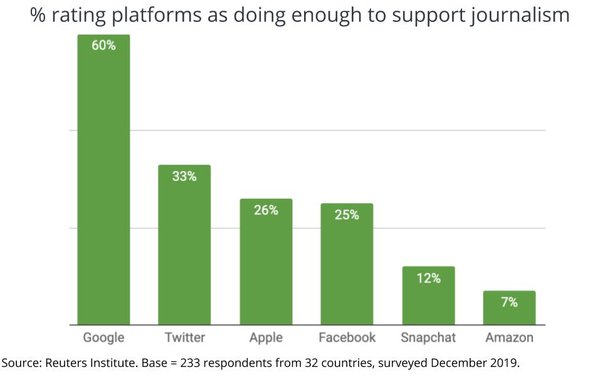