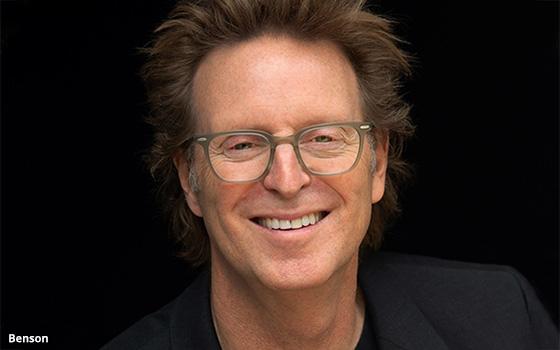 Benson, who came from Amazon Prime Video and successfully marketed TV shows such as the “The Marvelous Mrs. Maisel" and “Jack Ryan,” has been on the job three months.

Coming in with the closing of the ViacomCBS merger and replacing long-time chief marketing officer George Schweitzer, Benson considers the new big media company assets as he would other TV marketers in a complicated media world.

“I'm an advertiser that needs to use the scope and scale of ViacomCBS platform -- plus I need to add other things,” speaking to Television News  Daily recently at the Television Critics Association meeting.

“It’s no different than if I was an automotive, package good or fast food company. I need to engage audiences no matter where they are.”

Benson sees CBS as essentially one brand for its products -- TV shows whether via the traditional CBS Television Network or the digital video streaming platform, CBS All Access. “Whether it comes in through the linear network, or the digital network, almost doesn’t matter to me.”

The task was more daunting at Amazon: “We had to find the audience. They might have been on Amazon shopping. But we had to go out and reach those people.”

Benson and his team created a number of unique marketing initiatives for the big Emmy-winning show  “Mrs. Maisel.”

This includes “Maisel Day” back in August of last year where 28 Los Angeles locations -- salons, restaurants, delis and hotels -- offered all kinds of services at 1950s prices. For example, one could get a hair blow out for $2, and gasoline at 30 cents a gallon.

For CBS All Access, he says: “We have already done some unique things for “Star Trek: Picard,” using CBS on-air, as well as using social media to build interest in a deeper emotional Picard character.  This comes from different storyline than other “Star Trek” iterations, with Jean-Luc Picard more of an at-home figure and less of a star traveling adventurer.

Some initial key poster art offers up a picture of a vineyard with hint of a mysterious crop circle. In “Star Trek: Next Generation,” Picard once visited his family’s vineyard in France.

A tagline says: “The end is only the beginning.”

“It’s about people that love space, adventure, journey, thrilling, and mystery. [Yet] this is a much, broader property.” Benson views “Picard” kind of like “Jack Ryan,” a series on Amazon Prime. “Yeah, there are a lot of fans of Tom Clancy, but some people really just love a good action thriller.”

Some 25 on-air promos have run for “Picard” so far -- virtually all on the CBS Television Network, during late-season NFL games, pulling in 246 million impressions, according to iSpot.tv.

Going forward in nurturing the still new-ish "Young Sheldon," the strong spinoff of the now departed “Big Bang Theory,” Benson wants to make sure viewers don’t confused the show with the older show. “It's a different kind of show, more of a family comedy. It's a marketing challenge to go out and expose it people you might not be reaching on CBS.”

For all the efforts around new social and digital marketing, TV shows can still heavily depend traditional on-air promos -- even as network gross ratings points are falling. Benson says, with regard to those 10-, 15- and 20-second program promos: “I just question, does that even fundamentally work any more?”

That said, he credits a very powerful, strong marketing platform that longtime CBS marketing executive George Schweitzer put in place over the last several decades: George built an amazing foundation and a lot of it works. [Still] there are places we need to go and creative things we need to do. To engage with consumers in ways we have not done before. We did a lot of that at Amazon, and I'm going to do a lot of it here.”

Also: “We need to do things that are organic to the brand. But if it is not -- especially for younger audiences -- they can kind of smell that. I have learned that over the years.”