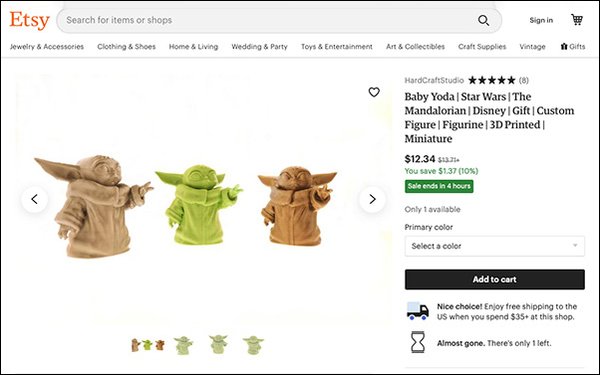 Etsy, the marketplace where sellers can sell handmade items, launched its Google Shopping advertising channel for sellers of goods in 2016, but one seller says the site has begun to push listings into Google Shopping from those who do not advertise.

“We have two Etsy accounts and it appears all of our listings from both accounts are being sent now to Google Shopping even though we had cancelled our advertising with Etsy several months ago,” wrote a reader on an ecommerce website.

Etsy in September 2019 introduced an advertising program that forced sellers to spend a minimum $1 per day for either promoted listings or Google ads, according to the seller, who said they had no control over the advertising mix. Results were very poor, and one month later the seller said they had to pay about $60 in advertising fees for about $10 in sales.

"We had done well when the advertising program was for promoted listings only when we could tweak the ad spend per listing and without the Google advertising component being forced onto us," the seller wrote. "... Maybe their advertising change backfired on them and they felt the need to try to boost sales through these uncharged Google ads."

It's not clear whether the "free" advertising on Google Shopping is a result of a glitch in Etsy's ad platform or if the company is challenged by growing pains, so Search Marketing Daily reached out to Etsy, but received no response.

During the third quarter of 2019, Etsy integrated its Promoted Listings and Google Shopping into one ad platform called Etsy Ads, where Etsy sellers can set a budget, according to the company's latest 10-Q U.S. Securities and Commission filing. Combining the two allowed Etsy to allocate ad budgets between channels to automatically get the best return on the seller's spend.

This offering eliminated Etsy's Promoted Listings service as a stand-alone advertising platform. Revenue from Etsy Ads consists of cost-per-click fees, which are nonrefundable and are charged to a seller’s Etsy bill when the ad is clicked.

The revenue Etsy recognizes from its advertising platform is recorded on a gross basis in Services revenue with an offsetting expense recorded in cost of revenue.

The marketplace also has been struggling with selling unauthorized products appearing in advertisements, but has yet to remove them from the site. Baby Yoda appears in an ad from HardCraftStudio at a discount of 10%, as Disney slaps the site with a takedown notice.

The Verge reports that Disney approached several Etsy sellers making and selling their own version of Baby Yoda, but some products are still being sold in the marketplace.