In Scheduling Fluke, Super Bowl, Oscars Are One Week Apart 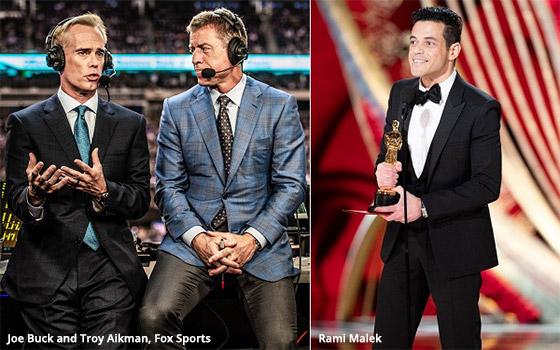 Not too long ago, they were the last two live events on TV that drew what were once known as mass audiences.

Nowadays, only one of them -- the Super Bowl -- truly draws a mass audience anymore. Nevertheless, for the first time ever, the Super Bowl and the Academy Awards are scheduled this year with just one week between them.

They have both long been staples of the winter TV season (and sometimes early spring, in the case of the Academy Awards). In recent years, they have aired roughly a month apart (at least once, the gap was three weeks).

Longer ago, you had gaps of two months or more between these two outsized events. Back then, the Super Bowl was generally in late January. The Oscars were then held traditionally in late March or early April.

To those planning to entertain guests for group viewing experiences around these events, please note: You will have only one week to restock your fridge and pantry after this Sunday's Super Bowl on Fox (Feb. 2) before the Oscars on ABC (Sunday, Feb. 9).

The group viewing experience -- i.e., building a social event around these events -- is still common to both of them.

They both could long be counted on to draw mass audiences too, but it is also true that the mass audience for the Super Bowl was always a lot bigger than the Oscars’.

For a long time, both of them were bigger than anything else seen during a typical year on TV.

More recently, last year's Oscars drew a total audience of 29.6 million. “Green Book” was Best Picture. Perhaps the movies have gotten small (as Norma Desmond observed in “Sunset Boulevard') and so too has the audience for the Oscars.

In case you haven't heard, the teams are the Kansas City Chiefs of the AFC and the San Francisco 49ers of the NFC. Joe Buck and Troy Aikman (pictured above, next to Rami Malek from last year's Oscars) will provide the play-by-play for Fox Sports.