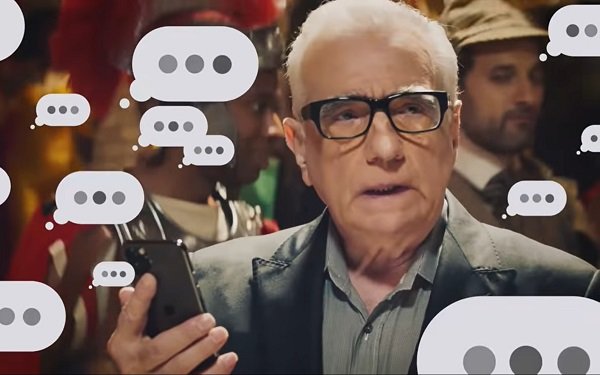 Nothing about the Martin Scorsese-Jonah Hill commercial for the Coca-Cola Energy drink made any sense.

The makers of this spot that aired during the Super Bowl should take no solace from the fact that the commercial earned the lead position in this TV Blog about the commercials seen during the big game Sunday on Fox.

Yes, the spot was memorable, but for all the wrong reasons. Moreover, on the morning after the game, I had to look up what the commercial was for. So much for memorability.

When it aired, I wrote in my notes: Who cares if Martin Scorsese (pictured in the spot, above) connects with Jonah Hill? In this situation, the stakes ranged from low to nonexistent.

The next morning, when contemplating it further, the nonsensical nature of this spot came into even sharper focus. In what alternative universe would Martin Scorsese, 77, have his heart set on meeting Jonah Hill, 36, at a party that looked like it was in a nightclub? Was Robert De Niro unavailable? Leo DiCaprio? Joe Pesci?

And why would Jonah Hill need a jolt of Coca-Cola Energy just to get up the stamina to meet Martin Scorsese in a club? Hill is 36. Does he really lack the energy necessary to get up off his couch without artificial stimulants?

At some point during this commercial, it seemed as if it would be for a phone company, what with all the text messages and the difficulties Scorsese was having with them. Then it turned out to be for this energy drink. Huh?

One of the problems with it may have been its use of this celebrity duo who we are supposed to believe are friends because they made “The Wolf of Wall Street” together. But as several other Super Bowl ads showed, pairings of rich, celebrity one-percenters are often unrelatable (and in this particular case, unbelievable).

The Alexa spot with Ellen DeGeneres and Portia de Rossi was one. “What do you think people did before Alexa?” Ellen asks Portia at the commercial's outset. I don’t know, Ellen -- order a servant to turn down the thermostat?

Another super-rich couple with no ability to relate to the rest of us was John Legend and wife Chrissy Teigen, who were seen saying good-bye to “old luxury” in favor of new luxury represented by the Genesis GV80 SUV.

In the process, Chrissy was seen showering insults on various guests at a party that she was throwing and, presumably, had invited them to. The spot made me think that only a self-centered jerk would ever wish to own this car.

Which commercials scored during the big game? These were the ones that did not rely on treacly sentiment, or the promotion of causes.

Oddities included the Cure Auto Insurance spot in which the young woman from last year’s ad, who had a screw viciously yanked out of her forehead by a man, got to slap him upside his head in this year’s commercial. And once again, this company inexplicably relied on violence between the sexes to sell car insurance.

The car category was particularly robust during the Super Bowl, particularly for EVs (electric vehicles). When I saw the spot with Idris Elba for a new electric Mustang SUV, I wrote in my notes: “Uh-oh, Mustang jumps the shark.”

Other spots worth mentioning included the Charlie Day Tide series, which got old after a while, but at least this series of spots running throughout the game was innovative.

On the morning after, many people seemed to still be talking about the Bill Murray “Groundhog Day” spot. This was a good idea, since the Super Bowl happened to be played on Groundhog Day.

What was the spot for again? I just had to look it up in my notes -- the Jeep Rubicon. Hey, on second thought, that doesn't really work. A car that showy seems very un-Bill Murray, doesn't it?

Throughout the game, the subject of gender equality and respect came up again and again in various commercials. Then came the elaborate butt-shaking antics of Shakira and J Lo at half-time. At such times, our culture and its various messages (mixed or not) can leave a TV columnist at a loss for words.

In the end, the commercials that were most memorable for me were the many Fox promos for upcoming shows such as “The Masked Singer” (after the game), “Lego Masters,” “9-1-1: Lone Star” and “The Daytona 500.”

In fact, promos for “Lego Masters” aired so often that I will go out on a limb here and name the show's host, Will Arnett, as the stand-out star of this year's Super Bowl commercials. Messages received.