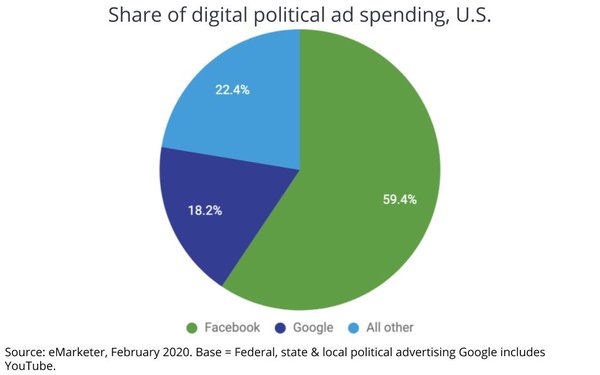 The ad industry likes to grouse over the fact that the Big Two digital platforms -- Google and Facebook -- represent something like two-thirds of every digital ad dollar. But when it comes to digital political ad dollars, nearly that market share goes to just one: Facebook. That's according to a new forecast released this morning by eMarketer, which estimates Facebook will take nearly 60 cents of every political digital ad dollar during the 2019-20 political advertising cycle.

Google, by comparison, is just 18% of that market, and all other digital publishers and platforms account for just 22%.

Facebook's dominant share of political ad spending explains a lot of things, including why it has declined to not just suspend political ads, but even ones proven to be fake, false and/or damaging to the truth. Yes, Facebook will draw the line at "deepfakes," but it has said it won't do anything about the not-so-deep ones, fabricated videos and/or video advertising known as "cheapfakes" it claims should be discernible by most people. Yeah, right.

Put in round numbers, Facebook's dominant share of digital political ad dollars "equates to $796.8 million," eMarketer's analysts note, adding that from a political advertiser's POV, the platform is just a super efficient means of reaching voters.