OTT Service Finds Consumers Prefer To Be Paid To Watch Ads, Converts To That Model 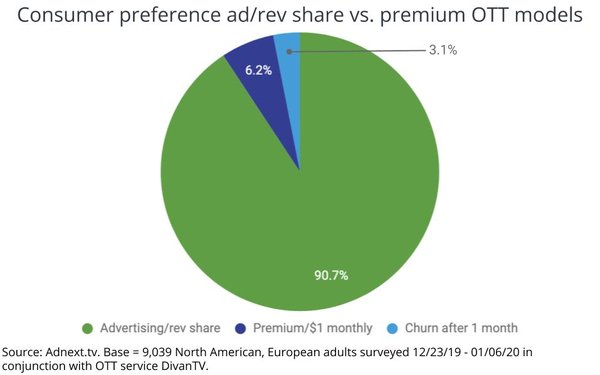 Nine out of ten consumers would prefer to subscribe to an OTT service offering them a share of the revenue from ads they are exposed to vs. an advertising-free version charging just $1 per month.

That's the finding of an unusual study released today by Adnext.tv, which surveyed thousands of adults in North American and Europe in conjunction with OTT service DivanTV, which made them the offer.

Based on the findings, Adnext.tv said DivanTV had opted to change its business model from a premium subscription to a "hybrid" one rewarding subscribers with a share of advertising revenues.

The companies said consumers would receive a 30% split of all ad revenues for ads they see.