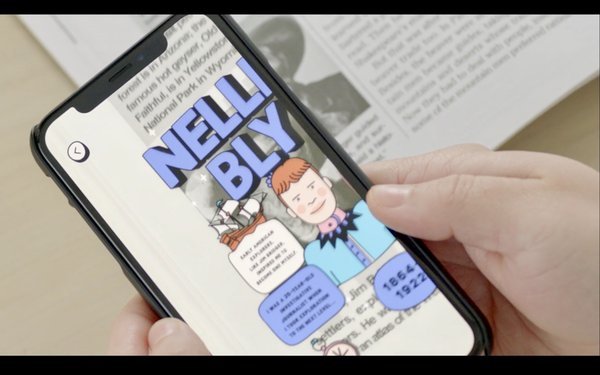 You can register to read more brand case studies like this one by clicking this.

Eleven percent. That’s the percentage of stories dedicated to women in U.S. history textbooks. Most people are aware that there’s still a major power imbalance between men and women, but often overlook how that imbalance begins to take hold during adolescence, a time when our perceptions of the world are being deeply informed by what we learn in school. The consequences of this imbalance are severe.

As one Rutgers University study put it, “When girls do not see themselves in the pages of textbooks, our daughters learn that to be female is to be an absent partner in the development of our nation.” In other words, you can’t be what you can’t see. But revising textbooks is a massive endeavor—it can take years to make even a single edit. Daughters of the Evolution needed a solution that could address the representation imbalance at a massive scale and at no cost to textbook publishers.

When they looked at how are kids being educated and exposed, history became the subject in which they saw the problem in a vivid manner. Middle school history curricula was overwhelmingly dominated by men, stories about men. Were women too busy as homemakers? Did they not have opportunity? Goodby Silverstein & Partners found that wasn't the case and surfaced hundreds of amazing game-changing women.

Using augmented reality (AR), GS&P was able to rewrite one of the most popular U.S. history textbooks without changing it physically. Through the Lessons in Herstory app, students can scan any photos of men in their textbooks to unlock related stories about forgotten women in history.

Within a month of the launch at SXSW, Lessons in Herstory earned 88 million media impressions.

It has been downloaded over 15,000 times from the Apple App Store, where it was named App of the Day.

It has also garnered the attention of notable organizations, including UN Women, the World Economic Forum and the Smithsonian Institution, which expressed interest in developing its own version of the app.

Most recently, GS&P was invited to present Lessons in Herstory at the Global Summit of Women in Switzerland, increasing global reach and further amplifying the conversation around gender equality.

Bonnie Wan, partner and head of brand strategy at GS&P, told MediaPost that the idea of the app was to showcase how technology in their hands could modernize and engage kids and close the gender gap without having to rewrite every textbook. "The problem of education in this country is that it is quite archaic," she said, "especially if you're looking at the education divide, the wealth gap."

The agency learned that "wow, teachers are hungry, they're thirsting for new ways to engage kids. They, too, have to deal with archaic resources," she said. "Public educators are challenged by time, work load, and class size. They are so motivated, so passionate. They are doing such noble things but they are also human."

We asked Wan if, looking back, the agency would have done anything differently. "Yes, absolutely," she said. "We would have seen the massiveness of the opportunity and seized that in a clearer way by bringing more investment and investors into this. We were surprised by how quickly it caught fire, how much demand there would be."

The agency got requests from all over the world for a similar app but, as Wan said, their app was designed only for the most popular books in use in California. After a call from the Smithsonian, asking if they could do the same for monuments and museums, they realized, "Oh, wow, learning is everywhere. Everywhere you find historical learning experiences, you find this problem. With diversity as well. And once you see it, it's hard to unsee it."

Wan's advice to other agencies and marketers is that "applying creativity and innovations in technology to solving our most fundamental societal problems is a meaningful way for brands and marketers to put their money where their mouths are.

"Leverage the power of corporate dollars to give back in extraordinary and meaningful ways that has lasting impact. We need companies to stand up more than ever these days."