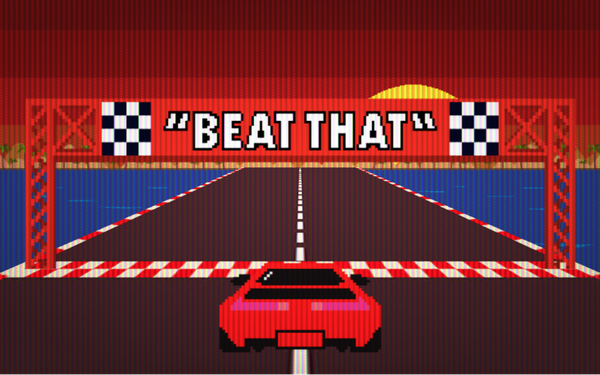 In less than one week, with no paid support, Acura’s “Beat That” mobile game has amassed more than 300,000 game plays in 160 countries, according to American Honda.

With paid media kicking in this week, the automaker expects more fans to try and “Beat That” by racing their favorite Acura vehicles.

Inspired by Acura’s “Less Talk, More Drive” brand campaign, “Beat That” is the first mobile racing game spanning 30 years of gaming styles. It was developed by agency of record MullenLowe.

Players race against the clock in the sporty historic Acura models including the first-generation 1991 NSX, Integra Type R, ARX-05 race car and the new Type S Concept. The game encourages players to challenge friends to “Beat That” across social networks.

The game is a merger of two important parts of popular culture: Cars and video games, and the audience gets to drive the dream car of their youth in a world inspired by the culture of that time, says Lisa Stessman, assistant manager, Acura social media.

“But it’s not all about the nostalgia of ‘90s games,” Stessman tells Marketing Daily. “As a player gets to the later levels in the game, the cars become modern, along with the race backdrop and the music.  This enables us to highlight our modern Acura vehicles, showing how they are just as worthy of their aspiration as those of the 1990s.”

Two of the cars in the game, the 1991 NSX and 1998 Integra Type R represent nostalgia for people who got their first car in the 1990s. Also in the ’90s, video games were starting to become a very important part of popular youth culture.

Free to play on desktop and mobile devices, the game enables players to race to the finish line of six unique tracks in one of six Acura vehicles featured in the “Less Talk, More Drive” TV spot. Each track represents an iconic era of gaming, from the popular 8-bit style of the ’80s and ’90s, to more photo-realistic treatments of modern gaming. Each Acura vehicle offers its own unique driving character and performance attributes.

In addition to being able to share across social feeds, players also can send a challenge to friends and family through Facebook Messenger or any other instant messaging platform.

Players also can test their skills through challenge lap times on the daily top 10 or all-time top 10 leaderboard.

Acura continues its use of GIPHY across social campaigns, this time creating “Beat That” GIFs using assets from the game. Players can use these GIFs to create their own Acura-styled game in the GIPHY Arcade.

The game is also available for play in the Facebook Instant Games platform: https://fb.gg/play/acura-beat-that.

“Other than introducing (or re-introducing) people to the Acura brand via the game, we’ve been very successful in getting them to spend significant time with us,”  Stessman  says. “So far, the audience spends an average of more than 5 minutes playing “Beat That: The Game.” Acura’s threshold of success for content on our social channels is usually measured in seconds, not minutes.”

A significant part of our audience also comes back for more.

“We have thousands of players who have come back to the game over and over, and a couple hundred dedicated fans have already played the game more than 25 times,” she says.