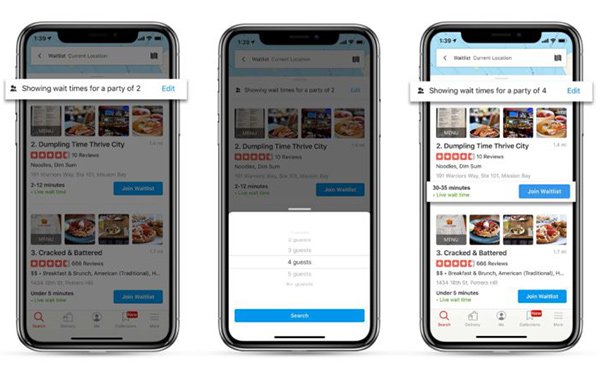 Yelp on Tuesday introduces several search features intended to draw consumers to their restaurant of choice.

Most of the options center on a feature Yelp calls Waitlist, which allows patrons to view a restaurant's live wait time and remotely join the waiting list before arriving at the location.

Waitlist Search supports specific party sizes. It allows Yelp users to indicate the number in their group when they conduct their initial search for somewhere to eat. This new search filter provides users with accurate wait times to help them make a decision about the best restaurant to choose.

Yelp also added a large party waitlist option for six people or more, with seating preferences that provide an option to indicate their preferred seating location, such as bar, booth or window, when joining the virtual wait list at their favorite restaurants.

The Notify Me option, which launched on iOS last year, now becomes available on Android and desktop platforms. This feature allows diners to schedule a reminder to join the Yelp Waitlist based on when they want to sit down to eat.

After indicating when and where they would like to eat, a push notification from the Yelp app or SMS text for desktop will appear when it’s the best time to join the virtual wait list to get seated at a specific time to eat.

Wade Allen, SVP and chief digital officer at Brinker International, which owns Chili’s Grill & Bar, states that Waitlist allows the company to research new potential guests as they scroll through Yelp to see if there is a wait.

Yelp data suggests that diners seated through the Yelp app return to the same restaurant twice as often as other diners, and 81% of diners say they are more likely to come back to a restaurant that uses the feature.

Yelp also announced that consumers set records on Yelp this past Valentine’s Day in which the company's reservation and Waitlist software helped seat nearly 250,000 patrons -- up more than double compared with the day in 2019.

This increase comes on the heels of strong growth in 2019, with diners seated growing by more than 150% YoY.