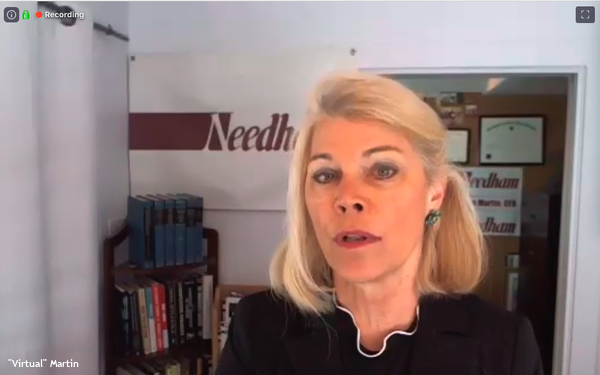 It’s possible that small businesses in the U.S. will emerge from the COVID-19 outbreak more dominant than those across the rest of the world, but not without some casualties.

“We are really worried about small businesses [in the U.S.], but others around the rest of the world are in worse shape,” said Laura Martin, managing director at Needham & Company, during an ARF Town Hall meeting on Thursday.

Small business advertising is a major revenue driver for companies like Facebook, and Google. Those ads are meant to reach consumers. Consumer spending is about 70% of the U.S. GDP.

Before forecasters can predict the future, they must answer three questions, Martin said.

First, when will the COVID-19 infection rate peak in each country? Second, once it peaks, how long will it take for consumer demand to return? Third, what percentage of small businesses will fail before consumer demand returns?

Travel advertising, which is the sixth-largest advertising category, has already shut down, Martin said. It was supposed to reach 8.6%, or $13 billion in the U.S. this year, of total digital advertising she said, citing eMarketer numbers. This includes anything related to hospitality.

The impact from travel advertising shutting down is three times worse across digital, Martin said, because it’s half of annual spend compared with television, print, radio or out-of-home. All this trickles down to small business.

The $2 trillion stimulus package making its way through the U.S. government will only help small businesses if the government finds a quick way to get the money in the hands of consumers. Martin said the real question will become how the money gets to consumers fast, so they spend it.

About 32% of consumers participating in survey from CivicScience of U.S. teens and adults through a polling application, which also released numbers Tuesday, said they will pay down debt or pay off bills and one-third on necessities. People also will use the money to manage credit card debt.

There are hundreds of millions of dollars to help small business in the United States remain solvent. For example, there's a 30-year loan at 4% interest with a clause that states will forgive the loan as long as the business doesn’t fire any of its employees for a specific amount of time. Martin said this would help business and advertising when the U.S. emerges on the other side of this pandemic, but it needs to impact consumers' fears.

“When the Chinese government decided to give money to its populace, it put the transfer payment on WeChat and everyone spent it within a week. WeChat, because it’s digital,” she said. “Here [in the U.S.] they will send checks and the address is wrong [they might not get it.]”

Martin and Brian Wieser, GroupM global president of business intelligence, said many offline companies will be forced to go online, but the U.S. government should also go online. The length of time companies will suffer depends, in part, in the length of time it takes to get this money into consumers’ hands and to what extent it resolves peoples' fears based on COVID-19. The third factor is how many businesses are solvent when the first two challenges are solved.