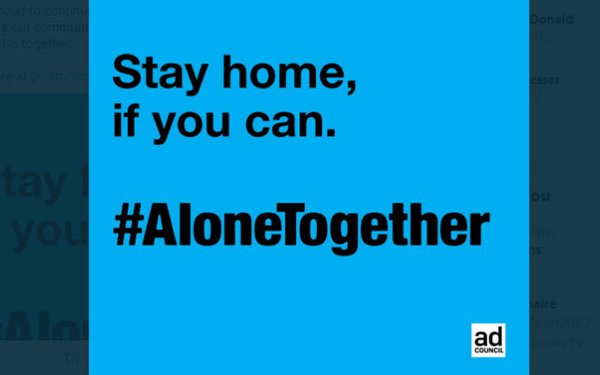 Xandr, AT&T’s advanced advertising unit, has announced that it is donating $200,000 to several nonprofits and using its platform to deliver PSAs to help fight the coronavirus.

The $200,000 will go to Save the Children, Feeding America, the World Health Organization, and the International Rescue Committee for food and healthcare supplies.

Xandr will also give an additional $20,000 to its employee resource groups “to support marginalized and otherwise-vulnerable communities who are now at greater risk,” including those with mental health issues.

As part of its Tech for Good program, Xandr is partnering with organizations including the CDC, the Clean the World Foundation and the Ad Council to distribute PSAs educating the public about hand washing, social distancing and other ways to help combat the spread of the coronavirus. (Ad Council creative example shown above.)

In addition, the company’s offices are donating weekly social funds to nonprofits, global office virtual charity drives, and Xandr Clubs-led fundraisers etc., and Xandr is working with AT&T and WarnerMedia to create virtual volunteerism opportunities, such as distance-learning and mentorship initiatives.

Xandr has maintained a low profile since its news last month that it would make the linear inventory of Disney, AMC Networks and WarnerMedia available through its platform was quickly followed by news that its CEO, Brian Lesser, had resigned.

And to address rumors that the unit might be essentially absorbed by AT&T’s WarnerMedia, AT&T COO John Stankey sent a memo to staff days after Lesser’s exit.

“I want you to know that our commitment to making advertising matter has not changed,” Stankey wrote. “Advertising is critically important to the future of media, and I believe platforms that evolve to accommodate both subscription and ad-supported formats will be a natural content aggregation point for the industry — not to mention a preferred experience for the customer.”

He added, however, that “There is still much more that needs to be done to integrate and coordinate more closely our go-to-market functions between Xandr and WarnerMedia. I will be working with the respective leadership in the coming weeks to achieve this objective — acknowledging that our inability to work from the office [due to the pandemic] will likely create some challenges.”

Since that memo, WarnerMedia has named a new CEO, Jason Kilar. The latest speculation is that could end up with oversight of AT&T’s ad-tech assets.