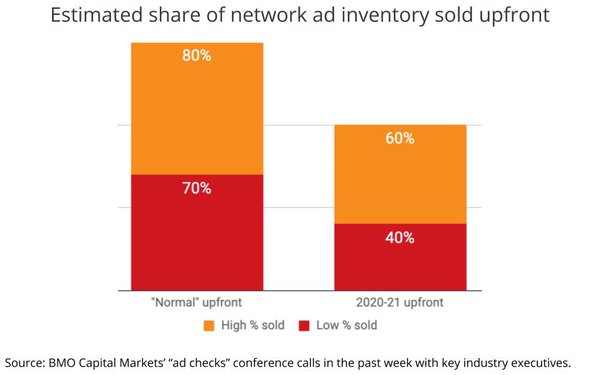 The current network TV scatter advertising marketplace has become very flexible, according to top media buyers, and the outlook for the 2020-21 upfront may be one of the lightest ever in terms of the percentage of network ad inventory sold. That's the finding of "ad checks" conducted over past week with top industry executives by the equities research team at BMO Capital markets.

He added that all eyes are on May 1, which is the deadline for third quarter options, when upfront advertisers have the right to cancel as much as 50% of last year's ad buys for the third quarter.

"One speaker noted they expect cancellations to be incredibly significant, and we currently expect the third quarter to be the trough for national TV advertising declines," Salmon noted, adding, "Another concern thereafter is the lack of new studio production and fresh content ready to come. Combined with the loss of the Olympics, linear TV could be looking at a considerable lack of new content from mid-May into the fall."

None of this bodes well for the 2020-21 network upfront buying season, which BMO's straw poll indicates might be among the lightest ever, in terms of the percentage of network ad inventory sold in the advance marketplace.

"Those with a view into the upfront expect volume to be more in the 40% to 60% range of total inventory, versus more typical portions sold in the upfront, likely closer to 70% to 80% normally," Salmon said, adding, "With the lack of new pilots and visibility into live sports, one speaker noted they think upfronts will functionally turn into a series of short-term/quarterly guarantees across a TV network group, rather than for specific shows."